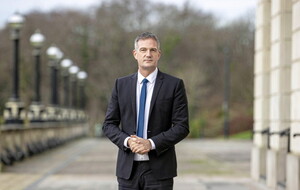 DUP MP Gregory Campbell has described as "incendiary" remarks by the shadow secretary of state around the circumstances under which a future Labour administration may call a border poll.

Peter Kyle's comments have been characterised by nationalists as merely a restatement of the conditions set out in the Good Friday Agreement.

Although the 1998 accord is unclear on the specific criteria under which the secretary of state would call a referendum, it states that a border poll should happen if it appears likely that a majority of those voting would support a united Ireland.

Mr Kyle said he "would not be a barrier if the circumstances emerge".

A subsequent statement from Northern Ireland Office said there was “no clear basis to suggest that a majority of people in Northern Ireland presently wish to separate from the United Kingdom”.

It said that in accordance with the Good Friday Agreement and the principle of consent, the north would remain under British rule "for as long as its people wish for it to be".

Mr Campbell told Radio Foyle that while the shadow secretary of state may have been stating a "legal position" he was "in danger of becoming somewhat incendiary".

"What I think would be more helpful would be for people, and particularly politicians who aspire to hold office, if they would understand what has happened – this has all emerged as a result of the census returns last week," he said.

"The census returns last week and 10 years ago, and even the 10 years before that show that Northern Ireland is becoming more and more diverse and the election results show in that same time period, as Northern Ireland becomes more diverse, fewer people are voting for parties that want a united Ireland."

The East Derry MP was asked three times what the DUP believed the criteria for a border poll was and though he insisted he had answered the question, his response was unclear.

He said issues that "may come about and 10 or 20 or 30 years time" should not take precedence over matters like the cost of living.

"And even Peter Kyle, in the midst of his incendiary remarks, understood that the here and now was much more important," he said.

Meanwhile, a former secretary of state has said it looks increasingly like the conditions for a border poll will be met.

Shaun Woodward told the Nolan Show: "The tea-leaves are undoubtedly pointing in the direction of suggesting there may be grounds for holding the referendum – which, under the terms of the Belfast agreement that we signed up to and incorporated into legislation, both in the UK and in the Republica of Ireland, we are bound to do that if those conditions are met."

He said the necessary conditions had yet to be met but were "getting pretty close".

"... it’s a judgement call, but I think you have to respect the legislation, as you know, I’ve always done so," the former Labour MP said.

"And we can have a poll – let’s remember that the poll doesn’t of course mean itself that will bring about unification."