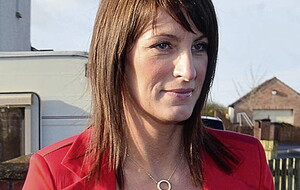 THERE have been calls for a crackdown on loyalist paramilitaries after a gang of masked men were videoed intimidating a family in Co Antrim.

Footage of the incident in Carrickfergus last Thursday, involving up to two dozen men, was shared widely on social media.

The gang, reportedly representing the UVF, appeared outside the home of a family whose teenage daughter clashed with another girl.

It is understood that the family under threat has lived in the area for decades.

The video footage shows that as the gang of men walk close to the property, the homeowner challenges them, calling the masked men "scumbags" and urging them to "catch a grip".

The PSNI said it received a report of a "number of people outside a house in the Cragfergus Avenue area" shortly before 8.40pm last Thursday.

“Officers attended and everything was calm on arrival,” the PSNI said.

It is understood police are not yet investigating any paramilitary link to the incident.

“It is now 24 years since our peace agreement, the Good Friday was endorsed in referenda by the people of Ireland, north and south, yet in 2022, loyalist paramilitaries continue to be involved in murder, racketeering, extortion, drug dealing and issuing sectarian threats," she said.

“This type of activity must end and these paramilitary gangs should leave the stage."

Alliance MLA Stewart Dickson said he was concerned about the reports but added that the video "does not reflect the Carrickfergus I know".

"These people like to describe themselves as the UVF but the reality is they are drug riddled gangsters involved in a show of strength," he said.

"It is deeply concerning for the family involved and unfortunate that it has escalated to this level – people with these grudges need to realise that there are other ways of resolving such disputes and many church and grassroots organisations in the area willing to help."

SDLP MLA Sinead McLaughlin said the targeted family's ordeal "must have been a terrifying'.

"No one should have to live in fear like this in their own community," she said.

"The time has long since passed for these people to get off the stage. Their criminal networks need to be disrupted and dismantled by police as a matter of urgency."