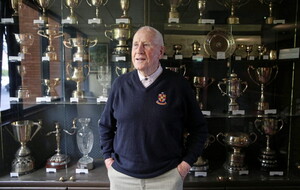 A NORTH Belfast great-grandfather has become a hero at his local golf club after winning a tournament at the age of 90.

Jimmy Kerr, who lives on the Antrim Road with his wife Lila, beat 124 other golfers at the weekend to win the Patsy Monaghan Trophy at Fortwilliam Golf Club.

Mr Kerr, who plays off a 31 handicap, played five shots better to score 41 points and win the tournament.

The former highway engineer, who has five grandchildren and five great grandchildren, took up golfing after he retired and plays up to four times a week.

Speaking to The Irish News following his tournament triumph, Mr Kerr said he initially took an interest as "friends of mine were playing all the time and my wife encouraged me to go out and play with them".

The north Belfast man said he enjoyed playing in the tournament on Saturday but "didn't know" how well he was doing "until much later on in the round".

"The people I was playing with, they encouraged me to keep it going," he said.

"There was quite a lot of birdies."

Mr Kerr said he didn't find out he had won until Tuesday.

"I couldn't believe it to tell you the truth," he said.

"I just got lucky on the day and the course was very good."

"He was playing against people 30 odd years of age, that's what makes it outstanding as far as we are concerned," he said.

"The last time someone of that age won a tournament here was two years ago, a man who was 81, and that was remarkable at the time.

"This doesn't happen every day of the week or every year. It was a remarkable performance."