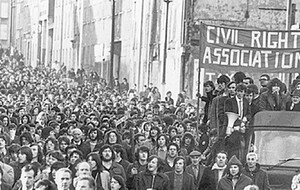 Thirteen people were shot dead while attending an anti-internment protest on Bloody Sunday and a 14th victim, John Jonston died later from injuries sustained on the day.

THE brother of a man suspected of being shot dead by Bloody Sunday paratrooper Soldier F hopes committal proceedings against the former soldier will recommence by as early as next week.

Deputy Director of Public Prosecutions, Michael Agnew confirmed yesterday that murder and attempted murder committal proceedings against the former soldier were to be recommended following a review of the case.

Committal proceeding are the legal process whereby a judge decides if there's enough evidence to justify a Crown Court trial.

Soldier F is being prosecuted for the murders of James Wray and William McKinney and the attempted murders of Joseph Friel, Michael Quinn, Joe Mahon, Patrick O'Donnell and a fifth unknown person, also on Bloody Sunday.

After starting, proceedings were dropped by the Public Prosecution Service (PPS) in 2021 following a separate case in May that year.

In a judicial review of the decision in March this year, the PPS move was overruled by Belfast High Court. Following a fresh review of that decision, the PPS says the case will now resume.

Mr Agnew said the case would be reactivated on its next scheduled date at Derry Magistrates' Court.

“I am very conscious of the upset caused to the Bloody Sunday families by the PPS decision to withdraw proceedings against Soldier F last year. It is our role to keep under review the evidence presented in every case.

“This case presented difficult and complex legal issues for prosecutors, as was acknowledged by the Divisional Court (High Court). The PPS is committed to progressing court proceedings against Soldier F without any further delay,” he said.

Welcoming the news, Michael McKinney, brother of William McKinney, said he expected the case to resume next week.

“We hope that the PPS secure an early date for the resumption of the committal proceedings and that Soldier F is returned for trial to the Crown Court without further delay.

“We hope to meet with the PPS to discuss the future progress of the case in the coming weeks,” Mr McKinney said.

The move has also been welcomed by SDLP leader and Foyle MP Colum Eastwood who said his thoughts were with the Bloody Sunday families following the announcement.

“It's bitterly disappointing that this case has been subject to such long delays which will have only compounded the hurt experienced by those affected, but particularly the Wray and McKinney families.

“The SDLP has always been clear that those accused of crimes on Bloody Sunday should stand trial. (It) was one of the darkest days in our island's history and many in Derry are still impacted by it to this day,” Mr Eastwood said.