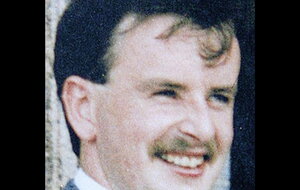 THE death of Aidan McAnespie's father John while awaiting a legal ruling in his son's manslaughter case has been described as "deeply poignant".

His death comes weeks after judgment was reserved in the case against a former British soldier accused of shooting his son dead.

The unarmed 23-year-old was killed seconds after walking through a fortified border security checkpoint in Aughnacloy in1988 on his way to a GAA club.

David Holden (52) was 18 at the time of the shooting and serving with the Grenadier Guards.

Mr McAnespie was described as “an old school Tyrone man” who fought a “tenacious” campaign on behalf of his son for more than three decades.

Michelle O’Neill, First Minister designate was among those to pay tributes describing Mr McAnespie as “a gentleman and a daddy that dedicated his life campaigning for truth and justice”.

Fermanagh and South Tyrone MP Michelle Gildernew said she was “deeply saddened to learn that John McAnespie has died”.

She said he had "dedicated his life to campaigning for truth and justice for his son Aidan," adding: "He never gave up".

“He was an inspirational, quiet and dignified man with a huge love for his community and local club Aghaloo GAA.”

“It is deeply poignant that the McAnespies now face the outcome of a human rights process without John, after his long and tenacious campaign he picked it up as he came on duty,” said Mark Thompson, chief executive of Relatives for Justice.

Elizabeth and John McAnespie, both now deceased, on the 20th anniversary of his 1988 death.

Aidan McAnespie’s late sister Eilish helped found RfJ but their father was “her touchstone and her adviser”, said Mr Thompson.

Expressing its condolences, the Pat Finucane Centre said: “The PFC sends deepest sympathy to the McAnespie family of Aughnacloy on the death of John who was an unflinching campaigner for justice after his son, Aidan, was shot dead by a British soldier.”

A campaign to find out the truth about Aidan McAnespie’s death began soon after he was shot in the back as he crossed the border to play a football match.

The British Army claimed the bullets were discharged as Mr Holden was moving he gun with wet hands. He was fined for negligent discharge of a weapon.

A PSNI Historical Enquires Team found this to be the "least likely explanation", but it would take another more than a decade before Mr Holden's faced a charge of killing the young man.

Former solider David Holden leaving court earlier this year following the opening of his trial in Belfast Crown Court. He is awaiting judgment on a manslaughter charge. ..