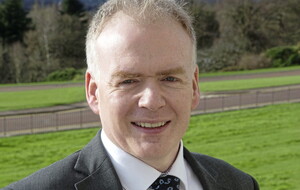 Justin McCamphill of the NASUWT

THE Education Authority (EA) had been urged to offer financial assistance to any substitute teachers left unpaid following the introduction of a new system.

The NASUWT said it had been "inundated with messages" from worried teachers who fear they will not be paid this month amid issues related to the Northern Ireland Substitute Teacher Register (NISTR).

Justin McCamphill from the teaching union said "it is now incumbent on the EA to put arrangements in place to immediately pay a cash advance to all those impacted by the situation".

The new system, previously removed from the control of the General Teaching Council and placed with the EA, went live in August, but shortly afterwards users said teething problems left them unable to access the database.

The system appears to have run into further difficulty with the EA writing to principals on Thursday to say all NISTR bookings had to be signed off with the current payroll period, which for August was September 5.

The Department of Education agreed to extend the deadline by two days to give schools more time to sign off their bookings.

"Additional staffing resources were put in place to process over 3,400 retrospective bookings submitted by schools and to provide assistance to those experiencing difficulties in using the new solution," the letter stated.

"Please be advised: All bookings that were 'accepted' by supply teachers and signed off by schools in NISTR by 6pm on 8 September 2022 for days worked up to 31st August 2022 will be paid on 16th September 2022.

"If a booking was not confirmed by a teacher and signed off by a school before 6pm on 8th September, 2022, the teacher will be paid on 18th October 2022."

It means that potentially some sub teachers will not be paid until mid-October.

It is believed most sub teachers would have only worked a limited number of shifts last month as the new academic term was only beginning, with estimates most worked around three to four, but some potentially up to eight days.

A newly qualified teacher earns £123.78 per day, while more experienced teachers can earn up to £210.74 per shift.

Mr McCamphill said the EA needs to step in and help those impacted.

"While it is expected that there will be teething issues with the introduction of any new system, it is fair to say that there have been more issues than anyone would have anticipated," he said.

"The new system has the potential to be one of the best systems anywhere for deploying temporary workers and we expect that these issues will not recur in the October pay roll.

"It is also the case that most of the issues are not the fault of the NISTR team. Nevertheless, many substitute teachers were expecting to be paid today for work carried out in August. Failure to pay these teachers is causing extreme financial hardship in the middle of the cost-of-living crisis.

"Teachers have told the NASUWT that they cannot afford to put fuel in their car to get to work in the first place. It is now incumbent on the EA to put arrangements in place to immediately pay a cash advance to all those impacted by the situation."

The EA has not issued a statement in response.