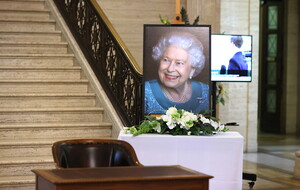 A portrait of Queen Elizabeth II, before a book of condolence will be opened, at Parliament Buildings at Stormont, Belfast. Picture by Liam McBurney/PA Wire

Queen Elizabeth was a “courageous and gracious leader” who contributed to peace and reconciliation in Northern Ireland, a special sitting of the Stormont Assembly has been told.

MLAs gathered at Stormont today, where Speaker Alex Maskey opened the session, which heard tributes to the late monarch from both unionist and nationalist parties.

Speaking first, Sinn Féin vice president Michelle O’Neill said the queen’s life and legacy will be “fondly remembered by many people around the world”.

“Today I wish to record the value and respect I place on the significant contribution Queen Elizabeth made to the advancement of peace and reconciliation between the different traditions on our island, and between Ireland and Britain during the years of the peace process,” she said.

“I recognise that she was a courageous and gracious leader.”

Ms O’Neill added: “She made real efforts, and in good faith, to build relationships with those of us who are Irish, and who share a different political allegiance to herself and her government, and who wish to exercise our right to self-determination based on consent to achieve reunification and a shared island for all.

“There is an onus on us all in politics and public life, but also the whole community, to follow her example and strengthen the bonds of friendship that will bring people and communities together.”

Ms O’Neill also said she wanted to “extend the hand of friendship” to the new King.

Alliance Party leader Naomi Long said that the Queen had shown “unswerving dedication” to duty right until the end of her life.

She said: “When we reflect on monarchy of course we acknowledge there are a range of views on the institutions.

“I think it is a remarkable achievement not just to have served on the throne as the Queen did for such a long period, but to have done so with such unswerving dedication to duty, right to her final hours to have continued in the work to which she was called.

“That I believe is a remarkable legacy which she leaves behind.”

UUP leader Doug Beattie said he was “deeply saddened” by her loss and that he was experiencing an unexpected sense of grief.

“The Queen remained a constant, creating stability and a national focus,” he added.

“Her Majesty the Queen had a knack of remaining current, accessible and approachable in a changing world.

“Although she would stand with heads of state and prime ministers and presidents, and with other kings and queens, she never lost her common personal touch.”

Mr Beattie, a decorated military veteran, said the Queen epitomised service and that her “commitment to reconciliation” on the island of Ireland was exemplified by her “extraordinary visit” to the Republic of Ireland in 2011.

He said she displayed “courage, leadership and generosity of spirit” on the visit which won the hearts of the Irish people, forging strengthened links between the UK and Ireland.

The DUP’s Gordon Lyons told the Assembly that no tribute or eulogy could do justice to the life of the queen.

He said: “Since the news of her death last Thursday, many people in Northern Ireland, across the UK and throughout the world have felt deep sorrow at the passing of someone who, as it has often been said, we will never see the like of again.

“Some have even confessed to being taken aback by just how sad they feel about the passing of someone they had never met.

“I believe the great sadness that has been so evident across the country exists because we are beginning to realise what it is that we have lost.

“For so many people, she was the constant: the unchanging presence in all the seasons of our national and public life.

“In an ever-changing world, in times of great national joy and celebration and times of sorrow, sadness and grief – she was the anchor: one we could look to for stability, continuity and comfort.”

Mr Lyons said the queen had a “unique capacity to bring us together”.

“As we witness the national outpouring of grief and love for her, we recognise that in death she still unites us,” he added.

The SDLP’s Stormont leader Matthew O’Toole added that one of the most notable achievements of the Queen was “her extraordinary contribution to reconciliation between Ireland and Britain”.

He said: “The extraordinary achievement of the late Queen Elizabeth was to use her symbolic role positively to move beyond safe historical positions towards new understandings and new connections – towards reconciliation.

“As the living symbol of the Crown, she embodied something on which people in Ireland have been deeply divided – but was able to use that symbolic role to bring people together.”

He referenced her state visit to Ireland in 2011 and her visit to Belfast the following year when she shook the hand of Martin McGuinness.

He said: “These were significant acts that a British monarch in her ninth decade did not need to undertake – but she did.

“As I said, we are all products of history, but we have a choice about how we respond to history.

“Do we act simply as delegates of a difficult past, or do we build new connections and new understandings?

“The example of Queen Elizabeth was to stretch herself, to be generous and to use the symbolic power of her role not simply to command loyalty but to win respect, warmth and build bridges.”

He said: “Hers was not a life immune from burdens and heartache.

“One such affliction was the wicked murder of the elderly Lord Mountbatten by the IRA.

“Yet she bore it with great fortitude, with generosity, with grace.”

Lord Mountbatten was the uncle of the Duke of Edinburgh.

The special sitting of the Assembly comes ahead of a visit to Northern Ireland by the new King on Tuesday.

Charles and Camilla will travel to Hillsborough Castle and Belfast for several engagements.

The trip to Northern Ireland follows a visit to Scotland today, with a trip to Wales planned for later in the week.

A significant security operation is under way in the Co Down village of Hillsborough ahead of the royal visit.

People continue to congregate at Hillsborough Castle, the royal residence in Northern Ireland, where a large number of floral tributes have been laid.

Man left victim with “blood pouring” from his neck after stabbing