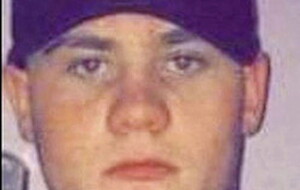 Joyce appeared at Belfast Crown Court via a videolink with Maghaberry where he was told he'll be sentenced for five charges - including murder - at the end of this month.

The 32-year old was handed a life sentence in June after he was found guilty by a jury of murdering John Paul McDonagh.

Mr McDonagh (18) sustained a fatal wound to his lower leg during a street battle outside Ennskillen home of Joyce in April 2020.

Joyce made the case he was acting in self defence and was protecting himself, his family and his Coolcullen Meadow home from an attack by the three brothers, who were armed with a knife, bottle and garden spade.

However, the jury rejected Joyce's claims and found him guilty of murdering Mr McDonagh with a slash hook.

He was back in court yesterdat, via a videolink with Maghaberry, where it emerged a tariff hearing will be held on September 30 to determine how long he will serve in prison.

Before the hearing took place, a crowd of around 200 people gathered outside the court in support of Joyce and his appeal against conviction, which has been formally lodged.

Wearing t-shirts and carrying banners bearing the message 'Justice for Joe', the supporters included Joyce's parents Joe and Alice, his wife Ellen and their three children, and Paddy Doherty.

The high-profile Traveller, who appeared in Reality TV shows including Celebrity Big Brother and My Big Fat Gypsy Wedding, has backed the appeal launched by Joyce.

"I didn't know the other young fella, God rest his soul, but I know Joe.

"What happened was manslaughter, not murder. Murder's like a different level. What he did that day, he was protecting himself, his home, his pregnant wife and his kids.

"It blew out of proportion. It snowballed, but what's happening now is just wrong."

Mr Doherty also revealed he is backing the appeal and said: "It was a terrible thing that happened and I'm so so sorry for the young boy, but Joe didn't mean to kill anybody. I've never seen Joe with a weapon before in my life."

A relative also travelled from England to support Joyce.

Paul Joyce, a cousin of the defendant, said:

"A young boy lost his life but at the same time Joe doesn't deserve to go to prison for the rest of his life when he was acting in self defence."

Joyce will be sentenced on Friday September 30 for murdering Mr McDonagh, wounding his brother Gerard, possessing two offences weapons - namely the slash hook and bottle of ammonia - and causing an affray.