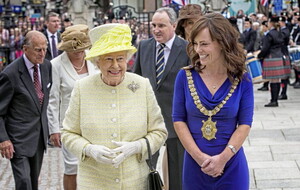 ONE of the first tasks in Nichola Mallon's in-tray when she became lord mayor of Belfast in June 2014 was to greet Queen Elizabeth when she visited the city.

The itinerary included a stop at Crumlin Road Gaol, then dinner at city hall.

But there were no speeches planned by either, Ms Mallon, the former SDLP North Belfast MLA, said. This changed.

“Tensions were quite high going into that summer,” Ms Mallon recalled. Tensions rising from the flags protests that roiled the city the previous two years were simmering again, threatening to reignite.

“I thought this was a genuinely great opportunity to reach out,” she added.

The SDLP politician penned some words, including quotes from the queen's grandfather, George V, at the 1921 opening of the Northern Ireland parliament.

There was a change in planning, with the decision made the queen would say some words at the civic reception.

She praised those who helped “turn the impossible into the possible'” and paid tribute to the work of those re-shaping Belfast.

“I felt that it did (ease tensions) because the queen is held in such high regard by certain sections of the community…she took time to reach out and promote reconciliation and to say how far the city had come.”

Ms Mallon remembers greeting the queen, Prince Philip and her lady-in-waiting when they arrived at city hall.

They went into the mayor's parlour, which includes a replica of a first class wash room from the Titanic, to freshen up.

“She was not very formal. She asked what it was like to be Lady Mayoress, my professional role. She asked questions about my family, whether I had any sisters and she did all that very early on,” said Ms Mallon.

And she was similarly at ease with others at the table, had read up about them, notably surprising Mr O'Neill by revealing she had recently watched a hurling game. The queen told him she was struck by the speed of the game, Ms Mallon remembers.

"My overall view is that people should not be born to privilege, everybody should be equal, but when there are people of huge importance who show leadership, I respect that," Ms Mallon said.