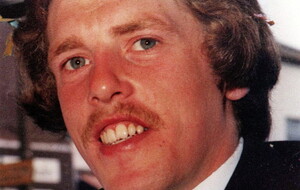 UVF gunman Brian Robinson, who was shot dead in 1989.

A VICTIMS group has led the condemnation of a weekend parade in Belfast in memory of UVF killer Brian Robinson.

Around 30 bands marched through the Shankill area of the city on Saturday for the annual parade dedicated to the loyalist gunman.

Robinson was shot dead by a female undercover soldier on September 2, 1989 shortly after murdering 43-year-old Catholic Paddy McKenna on the Crumlin Road.

Mr McKenna had been walking close to the Ardoyne shops when Robinson jumped off the back of a motorcycle and fired multiple shots at him.

Condemning the annual event, the South East Fermanagh Foundation (SEFF) said: “It is wrong for any public band parade to be named after someone who was engaged in terrorism whether republican or loyalist.”

In a statement, the Lisnakea-based organisation, which supports ‘victims/survivors of terrorism and other Troubles related criminal violence’, said: “There is no justification for the naming of a band parade after someone who committed sectarian murder.

“And to all who will participate in [the] event or those who would condone it; you have zero moral justification to call out Irish republican terrorists when they roll-out their coat-trailing shows of terrorism idolatry.”

The 30 bands which took part in the parade included bands from Scotland, Liverpool and the east Belfast-based UVF regimental band, whose members wear World War One era uniforms.

As well as UVF flags and insignia, the parade also included a banner dedicated to William Campbell, convicted of carrying out UVF pub bombings in Glasgow during the 1970s.

A 2012 book by Ciaran MacAirt claimed ‘Big Bill’ Campbell helped supply the explosives used in the McGurk’s Bar bombing in 1971, which killed 15 people. He died in 1997.

Organised by the ‘Brian Robinson Memorial Committee’, notice of the parade was published online by the Shankill-based ACT Initiative, an organisation set up in 2008 “to facilitate the civilianisation of the UVF”.

The notice described Brian Robinson as “a much loved and respected member of the Greater Shankill community”.

SEFF’s statement added: “People need to wise up once and for all; any family has the right to grieve their loved one irrespective of the actions they assumed in life however there is no entitlement for the idolatry of terror and violence within the public space and it must be rooted out of our society.”