A DECADE in the making, in just three weeks' time the new Ulster University campus will finally open in the heart of Belfast city centre. Education Reporter Suzanne McGonagle got a first look inside the state-of-the-art building 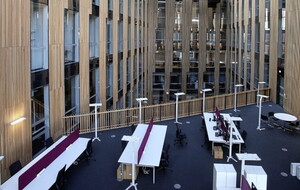 The 350 seat lecture theatre at the new Belfast campus of Ulster University. Picture by Mal McCann

TOWERING over the north side of Belfast city centre, the final phase of the multi-million pound Ulster University campus will officially open its doors to around 15,000 students and staff later this month as the new academic year gets under way.

Taking its architectural design inspiration from the shape of the surrounding Belfast Hills, the million square feet of building is one of the largest capital builds of its type in Europe and aims to transform higher education in the city.

Despite being more than £100 million over budget and after a four-year delay, the opening marks the end of a mammoth construction project which first began in 2013 when a consultation was launched about the future of the university's Jordanstown site.

Fast forward almost 10 years since plans were mooted to develop the Belfast site and a building that is substantial in scale and bold and striking in appearance is complete.

Last September saw the first phase of the redevelopment open when the university’s founding art school became the first to occupy the enhanced campus.

Colourful seating, beanbags and soft furnishings are peppered around the campus, all aimed at encouraging students and staff to socialise, with a sequence of atria spaces throughout that all benefit from natural daylight and views of the surrounding landscape and Belfast Hills in particular.

Around 6,000 staff and students are expected to be on site every day, making use of more than 300 learning spaces across the campus and each floor featuring a reception and hydration station.

There is an impressive 350 seat lecture theatre - the same passenger capacity of a Boeing 747 - and a 250 seat theatre that could hold 23 football teams.

The 350 seat lecture theatre at the new Belfast campus of Ulster University. Picture by Mal McCann

The two-storey library, with its beautiful wooden spiral staircase, stretches the whole length of Frederick Street and will be open 24 hours of day. With room for 300 people as well as private study sections for a further 200, it also features a laptop charging and rental station.

There are nine catering outlets, including a vegan restaurant and rooftop cafe, as well as a students union and gym.

The famous link bridge - known as the 'belly button' of the campus to those behind the project - is the place where all four blocks of the university link up.

One of the lecture theatres in the new Belfast campus of Ulster University. Picture Mal McCann.

A vast array of lab spaces are on site, including the biometric laboratory formerly located at Jordanstown and expected to be used once again by Holywood golfer Rory McIlroy to perfect his sport.

The equivalent of over 100 years' training, apprenticeship and employment opportunities have been offered during the build process with around 1,000 jobs - direct and indirect - created during the construction phase.

The local community will also be welcomed onto the campus over the coming months for engagements including school visits, arts events, research projects, shared learning opportunities and festivals.

Areas across the first two floors will also be open to the public who will be welcomed to feel part of the university community.

The new Belfast campus of Ulster University with views across the city. Picture Mal McCann.

Vice-Chancellor Professor Paul Bartholomew said: "It’s a campus where our students will fulfil their potential and thrive, with the opportunity to learn and study in a style that suits them, supported by the very latest technology and facilities.

"It also offers our staff a quality and vibrant place to work, connected to the social, artistic, residential and business community in the area."

Centre for domestic and sex violence victims opened in Derry