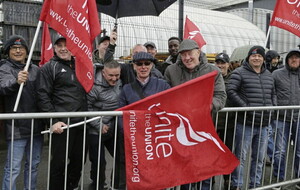 WORKERS in another council area are to go on strike next week, prompting fears of disruption to bin collection and other services.

Members of Unite employed by Lisburn and Castlereagh City Council will strike from Tuesday following what the union described as a breakdown of talks with management.

The strike action is open ended and continuous, the union said, adding its approximate 200 members will walk out.

“After the breakdown of talks involving all three representative trade unions, Unite, GMB and NIPSA, strike action is now set to proceed at Lisburn and Castlereagh City Council,” Unite said in a statement.

GMB and NIPSA have not yet said whether its member will strike.

Strike action involving all three unions is continuing in Armagh, Banbridge and Craigavon Borough Council area, but agreements were reached with Mid Ulster and Derry and Strabane district councils.

The union rejected a wider pay offer it argued “failed to protect workers from the cost of living crisis”. The National Joint Council offer to council workers was for a pay increase of £1,925 to all, with the lowest paid seeing a more than 10 per cent rise.

A Lisburn and Castlereagh council spokesperson said: “A national pay offer of a salary increase of £1,925 for all council staff in England, Wales and Northern Ireland is currently with the trade unions for consideration.

“In the last number of months the trade unions, UNITE, NIPSA and GMB made local demands that are over and above this offer.

“This council has been working with our local trade union reps and full time union Officials on different scenarios and what that might mean for budgets going forward.

“The council is currently briefing all political parties on the impact of any proposal in addition to costs we are already facing. This is to ensure that any decisions are made on the basis of what is feasible and sustainable for staff, services and the ratepayer. These discussions will take place over the coming weeks."

Strikes could happen in other council areas as no resolution has yet been reached with eight local authorities, including Belfast and notably Newry Mourne and Down District, where it is reported talks are close to deadlock.

Kieran Ellison, Unite regional officer for Lisburn and Castlereagh, called on the council to follow the lead of Mid Ulster and Derry City & Strabane, where all staff saw their wages rise two pay points.

“Unite members in the councils worked throughout the pandemic, they kept vital services going but now they are being treated appallingly by council bosses who want them to accept a huge cut to their incomes,” Mr Ellison said.

“That is never going to be accepted. Council bosses and the councillors in this council need to look to the example of other councils where this dispute has already been ended through an offer that protects the income of our members.”