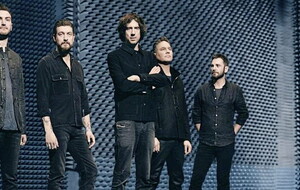 Snow Patrol are set to perform in Bangor tonight

SNOW Patrol frontman Gary Lightbody was last night awarded the freedom of his home borough in Co Down ahead of a sell-out gig tonight.

The musician received the Freedom of Ards and North Down borough during a private ceremony in Bangor Castle.

Ards and North Down mayor Karen Douglas nominated Lightbody for the honour last October for his contribution as a musician of international standing, philanthropist, and a champion of local charitable causes.

It is the highest accolade a council can bestow on a person.

As a public celebration of the award, Snow Patrol will take to the stage for an acoustic concert on Bangor seafront tonight.

The concert, which is due to take place at the McKee Clock Arena, sold out in record time as fans raced to secure one of the 5,000 tickets for the gig, which has been organised by Open House Festival and Ards and North Down Borough Council.

Speaking prior to receiving the award, Lightbody said: "I was born and grew up in the borough, and though I may have wandered for a few years, I made my home back in Bangor again.

"Johnny, Nathan and myself are really looking forward to playing on Bangor seafront for the very first time.

"This town, indeed newly minted city, has always been a part of me and always will be. I do still mourn Paul's chippy on the seafront though."

Support acts tonight have been specially selected by Lightbody and include up-and-coming Bangor band, The Florentinas.

Other acts performing before Snow Patrol take to the stage are Lucy Gaffney and David C Clements.

The gig also marks the end of the annual August Open House Festival in Bangor with profits from the concert going to the organisation's re-development of the old Bangor Court House into a non-profit music venue.