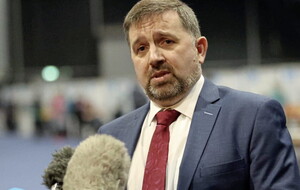 HEALTH workers will today hold a series of lunchtime protests aimed at highlighting deteriorating terms and conditions for staff.

The Unison-organised protests at sites in Belfast and the Southern trust area will see the union's members joined by colleagues from Nipsa, Unite, the British Medical Association and the Royal College of Nursing.

The demonstrations also aim to highlight the "astronomical" sums paid by the NHS every year to private contractors and agency staff.

Branch secretary Conor McCarthy told The Irish News that the protests between 1-2pm were designed to reduce disruption to services.

"These are actually part of our strike avoidance plan, as we don't want to take members out and disrupt services to the public," he said.

"It's sending a message to the powers that be that we prefer to raise these issues in this fashion rather than in the midst of a dispute."

Mr McCarthy said the protests were primarily about terms and conditions.

In July, Health Minister Robin Swann accepted the recommendation that health service staff should be awarded a pay increase of £1,400 for 2022-23. However, he said the increase could not be implemented without an agreed Stormont budget.

"We are rigorously asking the Department of Health to improve this offer and take into account the rising cost of living," he said.

"We have pragmatic solutions that will not interfere with national terms and conditions."

When asked for comment, the Department of Health did not respond.

"The long-term defunding of our NHS is having a devastating effect on health workers and patients alike," the West Belfast MLA said.

"Poor pay, poor staffing levels, and privatisation is putting immense pressure on health service staff, who are being forced to protest to defend the NHS."

Meanwhile, advice has been given to householders ahead of strike action by Royal Mail staff, beginning on Friday August 26.

The Consumer Council has said people should plan ahead and be aware that the postal service could be disrupted.

Belfast Blitz plaque back on show year after theft