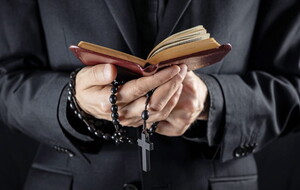 A document sent to the Vatican has demanded greater rights for women, LGBT people and those who are divorced within the Catholic Church

A CONSULTATION which found that Catholics in Ireland want equal status for women in the church is "explosive, life altering, dogma altering, church altering", former president Mary McAleese has said.

Mrs McAleese praised a document sent to the Vatican which demanded greater rights for women, LGBT people and those who are divorced within the Catholic Church.

The report from the National Synthesis came after a consultation with all 26 dioceses in Ireland.

In the covering letter sent with the document, Cardinal Mario Grech, the secretary general of the Synod of Bishops at the Vatican, was told dioceses also want major changes in the church’s attitude to single parents and the removal of mandatory celibacy for priests.

Mrs McAleese, who was born in north Belfast and is a former Queen's University academic, told the Irish Times that the calls for change come "not from the hierarchy, not from Rome, but from the people of God".

"Clearly there was a very, very strong movement for reform and change and this is reflected fairly and truthfully (in the document)," she said.

"There’s no denying those voices now. I hope when it is received in Rome it will be fully honoured."

The document has been sent ahead of the church’s Synod of Bishops called by Pope Francis to take place in October.

The report found that the role of women in the church was mentioned in almost every submission by the dioceses.

It said many young people cannot understand the church’s position on women and many perceive the church as "patriarchal" and "misogynistic".

The report also found there was "a clear, overwhelming call for the full inclusion of LGBTQI+ people in the Church, expressed by all ages, particularly by the young and by members of the LGBTQI+ community".

"Our listening process has identified the need to be more inclusive in outreach, reaching out to those who have left the church behind and, in some cases, feel excluded, forgotten or ignored," it stated.

In his covering letter, Catholic Primate Archbishop Eamon Martin told Vatican officials the report pointed to "many challenges for the handing of the faith in this country, including a need for inner healing and hope, especially among those who have suffered abuse by church personnel and in church institutions".

He said the report called for: "Fresh models of responsibility and leadership which will especially recognise and facilitate the role of women, as well as men".

Dr Nicola Brady, chairperson of the Steering Committee of the Irish Church's Synodal Pathway, launched the report in an address at Knock Novena.

She described some of the findings as "stark" and said that "many of the experiences shared are painful" but there were "many hopeful and encouraging aspects" to the findings.