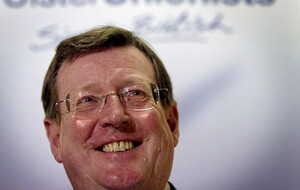 Lady Daphne Trimble said the foreign secretary had the "best record and a viable plan to protect our union".

His wife, who had a fleeting political career, standing in the 2010 Westminster election as a Ulster Conservatives and Unionists candidate in the Lagan Valley, said her husband's legacy was "safe" with Ms Truss.

Writing in the Daily Telegraph earlier this week, Lady Trimble said one of her late husband's dying requests was for his son to sort out the Tory peer's voting papers for the leadership election "so he could vote for Liz".

She said she echoed Lord Trimble's firm belief that the bookies' favourite to succeed Boris Johnson "was what the country needed".

“She has already proven her resolve and bravery in the face of opposition to our most valuable asset, and I am confident that my husband’s legacy, peace in Northern Ireland, will be safe with her," the article said.

Lady Trimble described unionism as a core conservative value that is “under threat”, primarily as a result of the Northern Ireland Protocol, adding it was one of the reasons she is backing Ms Truss.

She said the post-Brexit trade arrangements were putting “hard-won gains at risk”.

“In David’s words: ‘It drives a coach and horses through the agreement.’

“There needs to be a solution,” she wrote.

“It will not be easy, but the alternative is a continued political impasse in Northern Ireland, ongoing disillusion of the unionist community, and ultimately a breakdown of the fabric of our United Kingdom.”

The late former UUP leader's widow said an “iron will” was needed to see the Northern Ireland Protocol Bill through Westminster and into law.

She said the contentious legislation was “essential if we are to restore our political institutions in Northern Ireland and if we are to show the European Union that we will do whatever it takes to deliver the right solution for the UK”.