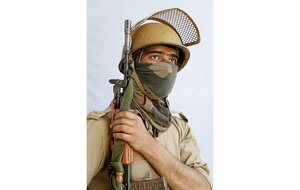 A portrait of a soldier taken in Kashmir several years ago. Picture by Cathal McNaughton

PULITZER Prize-winning photographer Cathal McNaughton is to become the managing editor of the European Pressphoto Agency.

Mr McNaughton, from Cushendall, Co Antrim, won the Pulitzer Prize for Photography in 2018 for his work documenting the plight of Rohingya Muslims in Myanmar.

He is to move to Frankfurt in Germany to take up his new role within a few months.

"That's a new challenge," he said.

Mr McNaughton is giving a talk at the Belfast Exposed gallery tonight about his exhibition Valley of Tears, a collection of portraits he shot covering civil unrest in Kashmir - the disputed region between India and Pakistan - several years ago.

A portrait of a soldier taken in Kashmir several years ago. Picture by Cathal McNaughton

He was working as chief photographer in India for the Reuters news agency when he won the Pulitzer.

Mr McNaughton, who started his career when he was a trainee photographer at The Irish News in the late 1990s, moved back to the north after he was denied re-entry to India due to his previous assignment in Kashmir.

He stayed in Co Antrim for a few years to help care for his mother, who has Alzheimer's disease.

Speaking to The Irish News before tonight's talk, he said the portraits from Kashmir captured young men on both sides of the conflict.

"Portraits like these are normally taken in a very sterile studio," he said.

"These were taken in the backdrop of a conflict zone. The set-up was very basic."

Photographer and artist Cathal McNaughton photographed at his home in Waterfoot, Co Antrim, in 2020. File photo by Charles McQuillan

Mr McNaughton said he used a bed sheet and a roll of Gaffer tape to make makeshift studios.

"You can't always pick and choose where to take your photographs because your subject will choose for you quite often, sometimes due to security reasons," he said.

"You have to be prepared to think on your feet and adapt to situations because they are always changing."

He said he encountered the soldiers and men on the other side of the conflict through a 'fixer' on the ground who had built up relationships with them.

"To get access to people, especially in conflict areas, can be very difficult because why would they trust you? They don't know who you are," he said.

"You have to rely on someone there, a journalist quite often who can get you access behind these doors you wouldn't get to open."

Mr McNaughton said he shot the soldiers facing in a different direction to the militants.

The Valley of Tears exhibition was due to end on August 27 but has been extended into next month.

Mr McNaughton will be giving a talk at Belfast Exposed at 6pm tonight.

For more information on the story behind the portraits, visit cathal-mcnaughton.com/blog/riots-in-kashmir.