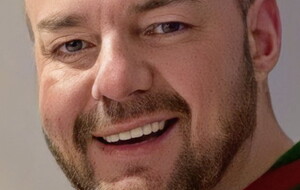 Darren Service has been refused bail

UVF pins, balaclavas and a replica firearm were located at the north Belfast home of a man accused of involvement in a bomb hoax targeting the Republic's Foreign Minister Simon Coveney, a court heard today.

Darren Service is currently on remand in Maghaberry following the March 25 incident, when a workman was threatened and forced to drive a device to the Houben Centre.

Mr Coveney was attending a peace-building event in the Crumlin Road premises, which was evacuated due to the security alert linked to opposition to the Protocol.

Service (41) - who is accused of driving two gunmen to the scene of the van's hijacking - made a second application for bail at Belfast's High Court yesterday which was refused by Lord Justice Treacy.

The application was made on the grounds of changes of circumstances including concerns over the well-being of his daughter and his gym businesses.

A Crown barrister said bail was opposed due to risks of further offending, and attempting to interfere with the course of justice.

Saying a prima facie case against Service had been established based primarily on CCTV evidence, the prosecutor branded the three charges he faces - preparing terrorist acts, hijacking a van and causing a bomb explosion - as "serious".

It is the Crown's case that Service was captured on CCTV driving a grey Skoda Superb in the same area of the Shankill where the van was hijacked.

The Crown say that after the two masked gunmen got out of the car driven by Service, they hijacked the van, threatened the driver, placed a device in the vehicle and ordered him to drive to the Houben Centre.

Upon his arrival, the distressed driver alert police to the device which was later declared a hoax.

The UVF later claimed responsibility and said Irish government ministers were not welcome in the north.

Service's Ballysillan Road home was searched by police later that day, and amongst the items recovered were two balaclavas, a replica firearm and UVF pins as well as high value jewellery and £10,000 in cash.

Service voluntarily attending with police two days later, where he admitted he was driving a grey Skoda Superb in the area but denied driving the masked men to the hijacking.

When asked about the items found in his home, Service said the money was from Covid loans, the balaclavas were for motocross, the replica weapon was for shooting pigeon - and that whilst he thought the UVF pins were "pretty" and "colourful" they had "no meaning" to him.

Defence barrister John Larkin said his client had given a full account both of his presence in the area to police, and the items found in his home.

The QC said Service has now been in custody for five months and was stressed about his daughter's well-being, and about his gym business and staff.

Mr Larkin also addressed loyalist unlawfulness linked to the Protocol Bill and said that given the now very different political landscape, "the context has been changed profoundly."

The judge concluded he had not been persuaded of a change in circumstances "which would justify releasing the applicant on bail, and accordingly the application is refused."