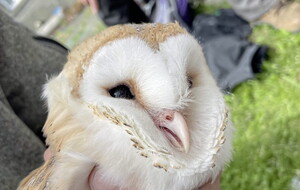 One of three barn owl chicks hatched and ringed at a new nest site at Ballycruttle Farm, Co Down

BARN owl chicks have successfully bred at a farm in Co Down just a year after nest boxes were set up.

Three healthy chicks were discovered at Ballycruttle Farm, outside Downpatrick, last month and have now been ringed.

Ulster Wildlife, who set up the boxes, estimate that there are fewer than 30 breeding pairs of barn owls in the north.

The birds have been hit by the loss of many of their hunting habitats and nesting places. Owl numbers have also been affected by the use of rodenticides, traffic, and wet and extreme weather.

Katy Bell, senior conservation officer for Ulster Wildlife, said: "We were absolutely thrilled to hear that a barn owl pair had settled into one of our boxes so quickly and even more excited when we heard the characteristic rasping and snoring sound of the chicks.

"Last year was tough for barn owls, with many nest sites failing, so this is welcome news for our tiny barn owl population and bodes well for the future as, hopefully, the chicks will go on to breed."

Dawn Stocking, owner of Ballycruttle Farm, said she was putting her children to bed when she spotted the owlets' father flying out of the box.

"This has been such a fantastic experience for us. The kids have loved being involved from putting boxes up, to seeing the parents fly out for food to watching the babies being ringed," she said.

"We are so proud to be helping with the recovery of a priority species, working alongside Ulster Wildlife and RSPB NI, and would encourage other landowners to get involved."

Mark McCormick, conservation officer for RSPB NI, who has been working alongside Ballycruttle Farm for many years, said he was delighted to learn of the new owlets.

"The seed-rich habitats maintained on the farm provide an essential winter food source for birds like the endangered yellowhammer, and also ideal territory for the barn owl to hunt for small mammal prey," he said.

"With the addition of the nest boxes, you can see why these magnificent barn owls have decided to make Ballycruttle Farm their home to raise their young."

In Strangford, four owlets fledged from a wildlife-friendly farm this year. At Mount Stewart, one owlet which hatched this summer has survived after its siblings were killed by predators.

Volunteers from Ulster Wildlife are surveying the countryside for signs of barn owls and potential nest sites.

If you have seen a barn owl or would like to help them, please contact Katy Bell at Ulster Wildlife on 07816 065 736 or email barnowls@ulsterwildlife.org.