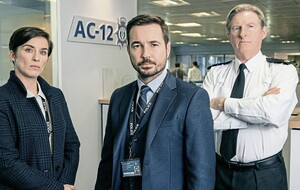 Line of Duty was among the most watched programmes in NI last year. Picture by World Productions/BBC One/PA Wire

THE Oprah Winfrey interview with Meghan and Harry was the most watched television programme in Northern Ireland last year, according to new figures.

A report from the communications regulator, Ofcom, reveals that the television special hosted by the American media personality pulled in more than half a million viewers in the north in 2021.

Two popular TV dramas filmed in Northern Ireland - Line of Duty and Bloodlands - were the second and third most watched programmes.

Other statistics released today by Ofcom show that local news progammes - UTV Live and BBC Newsline - also featured prominently in the list of most watched programmes of viewers in in 2021.

The report also reveals social video platforms are competing for viewing time and are particularly popular among younger age groups.

However, the Ofcom statistics also highlight the ongoing popularity of TV and radio in Northern Ireland, especially for news with around half of adults in the north (56 per cent) using BBC One and UTV (54 per cent) for news in general.

Social media ranked highly too, with Facebook the third most-popular source of news (34 per cent).

People in the north are also more likely to use radio for news compared with other parts of the UK. Local radio continues to outperform national stations, accounting for 58 per cent of all listening - the highest across the four UK nations.

Radio is also benefitting from the growth in smart speaker ownership, with six per cent of listening to radio now done through one of these devices.

Among people aged 16+ in Northern Ireland, 49 per cent said they had a smart speaker in their home, considerably higher than in the UK as a whole (39 per cent).