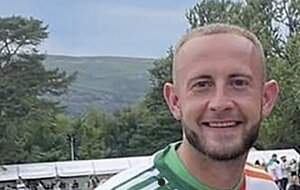 SEVERAL funders of Féile an Phobail are to discuss concerns about pro-IRA chanting with the festival organisers.

Thousands of spectators took part in 'oh, ah, up the 'Ra' chants during Sunday evening's concert by The Wolfe Tones.

Larne FC footballer John Herron, who previously played for Celtic, has been suspended by his club after he was pictured wearing an 'up the Ra' t-shirt at the gig.

Video footage from the unveiling of a west Belfast mural, which showed a PSNI Land Rover on fire, showed people chanting 'get the Brits out' last week.

Féile has stressed that it did not organise the mural unveiling.

Read more: Chris Donnelly - If loyalist tunes are okay then why not republican songs? (premium)

However, the popular community festival has come under pressure to address the chants after several politicians raised concerns.

Tourism NI, one of the funders of Féile, said it was aware of the issues.

"Tourism NI's events funding offers are made on the basis of due regard for good relations," a spokesman said.

"Our funding agreement clearly stipulates the responsibility of the event organiser to promote good relations and uphold Tourism NI's reputation as a public body and a failure to do so may result in Tourism NI withdrawing all or part of our funding."

Translink said it will meet with Féile organisers.

"As part of Translink’s support of Féile An Phobail we sponsored the recent Teddy Bears' Picnic family event and hosted Music on Metro and Gigs on Glider activity, promoting wider use of public transport as a sustainable and cost-effective travel option," a spokeswoman said.

"We will be seeking a meeting with the organisers to review this situation."

A spokeswoman for the Arts Council said it awarded £116,599 to Féile this financial year.

"This award makes a contribution to the organisation’s staff salary costs only and not artists'/musicians' fees," a spokeswoman said.

"The Arts Council condemns sectarian behaviour in any form, and we intend to discuss the issues raised with the festival organisers."

The Charity Commission for Northern Ireland said it was "aware of the current news regarding the charity, Féile An Phobail Limited, and can confirm that it is following up with the charity trustees on the issues which have been raised".

"I want constitutional change in Ireland," he tweeted.

"But in designing that vision and inspiring people about it there are few things that are less helpful than Up the Ra chants and the same old angry songs.

"If people are serious about unity, they need to be honest about that."

Ulster Unionist MLA Robbie Butler said the party will review whether it should take part in future Féile events.

"The organisers of the Belfast Féile need to have a very long and hard look at what they are actually responsible for putting on, because sadly certain aspects are poisoning another generation with the hatred of the past," he said.

"Should the Féile organisers take no meaningful action to address this, then the Ulster Unionist Party will have no choice but to review our future participation in Féile organised events.

"This would be deeply regrettable, because many events are very worthwhile and provide a forum for genuine discussion and engagement."

DUP MLA Emma Little-Pengelly said she will write to the festival's sponsors and partners, asking them to condemn the chants.

"Repeated chants throughout the concerts about the Provisional IRA, led by the musicians on the stage, require leadership from all the festival funders," she said.

He said the festival meant that no internment bonfires were lit in the west of the city on August 8.

"Féile an Phobail includes all opinions and provides a platform for many different views, free from censorship of panellists, artists or performers," he said.

"The Wolfe Tones are one of Ireland’s most famous musical bands, and have played to sold out audiences right across Ireland, Britain, the USA, and indeed the world for the past 58 years.

"They are popular with Irish people and the Irish diaspora across the world.

"No public funding is received from any funders to pay for The Wolfe Tones concert."

Read more: Chris Donnelly - If loyalist tunes are okay then why not republican songs? (premium)