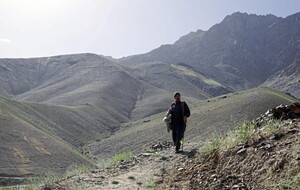 A 56-year-old man walks with the help of a cane in Daykundi Province, Afghanistan, on May 28

PEOPLE in the north have raised more than £800,000 for families facing starvation in Afghanistan.

Drought in the country, economic collapse and rising global food prices have pushed millions to the brink of famine.

A humanitarian appeal was launched in December following the Taliban takeover of the country a year ago.

The Islamic fundamentalist group retook control of Afghanistan on August 15 2021.

So far, the DEC Afghanistan Crisis Appeal has raised £50 million across the UK, including £10 million matched by the British Government.

In Northern Ireland, the DEC brings together the charities Concern Worldwide, Save the Children, the British Red Cross and Tearfund.

In the first six months of the appeal, DEC funds have helped almost a quarter of a million people to buy food, medicines or fuel.

More than 100,000 people have been given medical assistance, including vaccines.

More than 2,900 children under five and pregnant or breastfeeding women have been treated for acute malnutrition.

Around 18.9 million people - nearly half the population - are struggling to get enough food.

A 56-year-old man walks with the help of a cane in Daykundi Province, Afghanistan, on May 28

Up to 3.9 million children are acutely malnourished.

"We know through our own work in the country that the situation has been dire for many years, yet the last number of months have pushed many more into crisis," he said.

"This money has gone a long way in providing cash assistance, emergency food supplies and access to healthcare, and we thank the people of Northern Ireland for their support."

Salah Saeed, CEO of the DEC, thanked everyone who has donated to the campaign so far.

"People in Afghanistan suffered a terrible winter and spring with millions struggling to feed their families," he said.

"Donations to the DEC Afghanistan Crisis Appeal have helped provide a lifeline to hundreds of thousands of those most in need, providing food or the money to buy it."