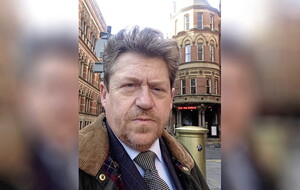 Roger Lomas of the NI Conservatives

The lunchtime event at the Culloden Hotel in Cultra, Co Down is open only to Conservative Party members and their guests.

Up to 250 audience members will quiz the two leadership candidates on their record and policy pledges at what is said to be a sold out event.

The sixth hustings of the leadership contest will take place tonight in Perth, with four more remaining after tomorrow's.

The two candidates go head-to-head for the final time in London on August 31 ahead of the new leader being announced on September 5.

Ms Truss and Mr Sunak are expected to be quizzed on the Northern Ireland Protocol, the cost of living crisis, and support for the regional party, currently led by Matthew Robinson, which has been plagued recently by internal disputes.

Last week, a bid by the former chair of the NI Conservatives Alan Dunlop to rejoin the party was rejected.

Roger Lomas, a member of the NI Conservatives executive, said that while there was a sense of anticipation ahead of tomorrow's hustings he said there wasn't the same level of excitement that greeted the corresponding event featuring Boris Johnson and Jeremy Hunt in July 2019.

"My feedback from members is that there just isn't the same buzz as there was when Johnson and Hunt were in town – that said, I'm encouraged that the event is sold out," he said.

Stressing that he was speaking in a personal capacity, Mr Lomas said he would have much preferred to see "Kemi and Penny" battle it out – meaning Kemi Badenoch and Penny Mourdant, two candidates previously eliminated.

"If you ask me, both Truss and Sunak have too many associations with Boris Johnson," he said.