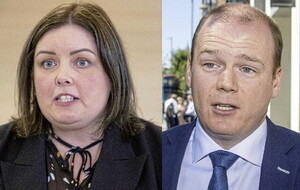 THE means of delivering a discount on household energy bills has still to be finalised but Chancellor Nadhim Zahawi last night insisted that "no option is off the table".

The DUP's continued boycott of the institutions is being widely blamed for the failure so far to secure mitigation payments of up to £400 to domestic energy customers in the north from October 1, when roll-out of the scheme begins in Britain.

The chancellor and Stormont ministers yesterday met for the second time in a week in an effort to find a way of delivering the payments. Those attending the virtual meeting alongside Mr Zahawi were Economy Minister Gordon Lyons, Communities Minister Deirdre Hargey and Utility Regulator chief executive John French.

After the meeting, the chancellor said a taskforce would be established comprising of UK government officials and senior NIE staff to ensure the necessary support was delivered as soon as possible.

Mr Zahawi said: "We need to keep the momentum up to get equivalent energy support to people in Northern Ireland and that’s why today I’ve launched a joint taskforce to present practical delivery options back to ministers – no option is off the table.

"We’ve got our noses to the grindstone, we’re making progress, and we have a shared objective with minsters in Northern Ireland to get this off the ground as soon as possible."

But Ms Hargey, who took the unusual step of issuing a statement through the Sinn Féin press office rather than via her department's media team, said she was concerned a solution had not yet been agreed "by the Department for the Economy and the British Treasury". The minister said a means of delivering the payments "needs to be done as a matter of urgency".

“We are approaching an autumn and winter which will be extremely difficult for workers and families as the price of heating and lighting homes continues to soar," she said.

“Discussions are continuing to try to find a workaround to get the payment out into people’s pockets but there is no doubt that the absence of a functioning executive is making this more difficult."

Ms Hargey urged the DUP to "end its boycott of the executive".

Mr Lyons, who also issued his comments through the DUP press office rather than his department, said that in Britain the payment was being delivered directly from Treasury to the energy companies.

"I am glad today the Utility Regulator was able to outline a proposal to similarly deliver the scheme directly via our six Northern Ireland energy suppliers – this is the fastest and most straightforward path to deliver the payment," he said.

Mr Lyons said he was disappointed that more progress had not been made but that he would hold the Treasury to its previous commitment to deliver the payments.