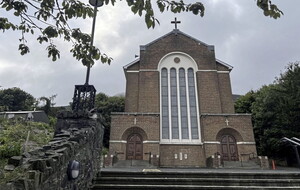 A statement said the church will not close. Picture by Hugh Russell

A NORTH Belfast church has dismissed claims that it is to close or be demolished amid rumours about a planned housing development.

In a statement, St Gerard's Church on the Antrim Road, said it is to remain open and the "Redemptorist Order remains wholly committed to this parish and to this community".

It comes following speculation about the future of the church amid plans to build more than 60 houses in the area.

The church said it wanted to "bring parishioners up to date with developments and also to address any misinformation or confused messages you may have heard".

"Most of you will know that planning permission was received to build 64 new much needed houses a few years ago," it said.

"We are now moving ahead with that project and in the next few weeks the formal sale of the land will be completed.

"The first major part of the work, which will take place is the widening of the road to the right of the church, which will allow for access to the site when the housebuilding begins. That does mean there will be disruption here at St Gerard's as the road work takes place. You may have heard that St Gerard's will close, and indeed never re-open. That is not the case.

"The Redemptorist Order remains wholly committed to this parish and to this community."

The church also said "weekend mass will continue throughout the build period", but could be subject to some changes.

"It is likely though that daily mass will move when the time comes, as access to the church during the day, when the construction work is taking place, will simply be impractical," it said.

"One option is that daily morning mass is moved to the evening and we will also have to consider how midweek funerals will be managed also. But none of this is for the immediate future."

The statement also confirmed that Stepping Stones nursery that uses the parish hall will relocate to Park Lodge Primary School for the coming year as "it is impractical that they access the hall during the constriction period".

"I want to stress too that contrary to anything you might have heard or been told, there are no plans to demolish the hall," the statement added.