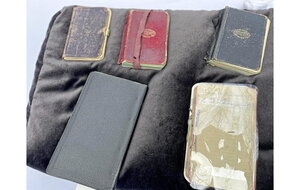 DIARIES belonging to Michael Collins are being made available for public viewing after the republican leader's family loaned them to the Irish National Archives.

Five diaries belonging to Collins, which cover the period between 1918 and his death in 1922, were presented to Taoiseach Micheál Martin last November.

Containing never-seen-before details of meetings and engagements carried out by the revolutionary icon, the diaries have undergone conservation treatment and have been digitised to allow for public viewing.

Previously, only two of the five diaries were on public display, with just two of the pages visible. Now all five are displayed at Michael Collins House Museum in Clonakilty, Co Cork, with a touchscreen allowing visitors to read their contents. They will be made available to the wider public in digital form though the National Archives from next month.

The National Archives has described the diaries as a "hugely significant" acquisition.

A spokesperson said: "In returning the diaries to the place of Collins’ youth, a place that shaped and formed the young revolutionary, we are introducing them to a wider public as an important new primary source to further our understanding of this significant national figure."

The new display comes ahead of the 100th anniversary of Collins' assassination at Béal na Bláth in Co Cork on August 22, 1922.

Speaking on RTÉ Radio 1's Morning Ireland show yesterday, National Archives director Orlaith McBride said the diaries "make little mention of some of the momentous events that we would expect to see" and rather contain details of more mundane aspects of his dealings.

"People would be surprised in that they're not going to read Michael Collins' innermost thoughts or contemplations," she said.

"They are not there, but there are significant entries that clearly speak to a man involved in extraordinary times."