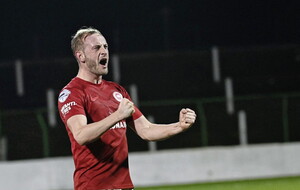 Larne FC player John Herron has been suspended by his club after he was pictured wearing a t-shirt printed with slogans including tiocfaidh ár lá and 'up the 'Ra'. File picture by Colm Lenaghan, Pacemaker

Larne footballer John Herron, who previously played for Celtic, has been suspended after being pictured wearing an 'up the Ra' t-shirt.

Herron was wearing the shirt at a Wolfe Tones concert in west Belfast on Sunday evening.

Scenes of young people taking part in pro-IRA chants at the concert have also been condemned.

The Wolfe Tones are a regular feature at the annual Féile an Phobail.

The Irish League club suspended the player after images of him wearing the slogans, including 'tiocfaidh ár lá' printed in shape of a gun, appeared online.

Larne FC said Mr Herron had been "suspended with immediate effect" with the club launching an investigation.

"We have shown that we are an inclusive football club for all, demonstrated not only in words but also by our extensive work in the local community," it said.

"There is no room for behaviour which falls outside of this ethos and we fully expect members, players and anyone associated with the club to reflect these standards at all times.

"We will be making no further comment until the investigation has been completed."

"The glorification of the IRA, or any other terrorist organisation, is utterly unacceptable," Mr Lyons said.

"Sadly, this is something we have seen all too often lately and it must be condemned unequivocally."

Ulster Unionist MLA John Stewart said the image was "beyond the pale".

"Both Irish league players in that photo - including the one who posted it on his social media account - need to search their consciences and realise they have questions to answer," he said.

"This behaviour being replicated year after year is damaging and it sends the wrong message out to young people for it to go unchallenged," she said.

"The glorification and celebration of terrorist groups by chanting crowds is vile and should not be facilitated within a council-owned park.

"We need to hear from the organisers of Féile an Phobail as to how they intend to tackle this behaviour."

Over the weekend, there was strong criticism of a west Belfast mural unveiled by Irish language rap trio Kneecap which showed a PSNI Land Rover on fire.

The sale of UVF and Parachute Regiment flags during an Apprentice Boys' march in Derry was also condemned.

Alliance MP Stephen Farry said he was concerned by a "worrying spate of sectarian incidents over the course of the summer from different sections of the community".

"I think we're seeing almost a casual sense of sectarianism," he said.