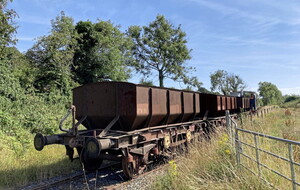 The saved hoppers, which were built by CIÉ and Parsons Ltd in the seventies, ran all across the Irish Rail network until their withdrawal in 2013

Downpatrick & County Down Railway has saved four historic railway wagons - the last type ever to be built in Ireland - from being scrapped.

The hoppers, which were built by CIÉ and Parsons Ltd in the seventies, ran all across the Irish Rail network until their withdrawal in 2013. They are the last railway wagons built in Ireland, with all new rolling stock now coming in from overseas suppliers.

The wagons were parked up in Dublin's North Wall yard where they remained for the last nine years until they were finally sanctioned for scrap which prompted the DCDR to request the best ones.

The wagons include three ballast hoppers, which can hold up to 20 tonnes of stone which is that is deposited on the railway line to hold the track in place and give a smooth ride when tamped.

The fourth wagon is a special brake van, which has an underfloor plough fitted that then spreads this stone to where it's needed.

Robert Gardiner, chairman of DCDR, said: "These wagons are destined to help our Permanent Way gang keep our track up to standard, as well as help rehabilitate the currently mothballed ‘south line' beyond Magnus's Grave.

"This acquisition demonstrates our commitment to maintaining our track to the best standard possible, as well as ultimately being used to increase the journey length by giving us better tools for maintenance and expansion".