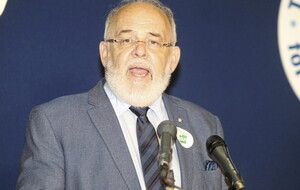 THE WESTMINSTER standards watchdog has been urged to probe a social media post by a Sinn Féin MP.

DUP MP Carla Lockhart has written to the Parliamentary Standards Commissioner about a post on Francie Molloy's social media page on August 8.

She has accused the Mid Ulster MP of "glorifying the actions of IRA terrorist Thomas McElwee".

Mr Molloy posted a tweet about the hunger striker on the anniversary of his death.

McElwee was jailed for his involvement in the bombing of a shop in Ballymena that killed mother-of-three Yvonne Dunlop in 1976.

In the letter, Ms Lockhart said: "It would be unthinkable for a Member of Parliament from any party other than Mr Molloy's to post a tweet paying tribute to someone like Thomas McElwee.

"Were any other member to glorify such an individual or their actions they would undoubtedly be viewed as having brought parliament into disrepute. This should be no different just because the member in question happens to be a Sinn Féin MP."

Ms Lockart claims Sinn Fein MPs "may have engaged in such glorification of terrorism in the past" but that does not count as mitigation, but instead should be considered a "deliberate" breach of the parliamentary code of conduct.