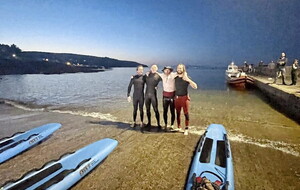 A GROUP of four men have navigated strong tides and blooms of jellyfish to complete the first 38-mile journey from Scotland to Northern Ireland on rescue boards.

Event organiser Carl Russell (40) from Aghadowey in Co Derry, his brother Jamie Russell (28) and friends Connell McBrearty (32) and Colm Watters (40), paddled on rescue boards from Campbeltown on the west coast of Scotland to Cushendall in Co Antrim, finishing on Thursday evening.

The team, which is raising money for Air Ambulance Northern Ireland and the RNLI, set off at 11.10am from Campbeltown RNLI station and arrived at Red Bay RNLI station in Cushendall, Co Antrim, 10 hours and 45 minutes later.

"Nobody has ever done what we did - going from Scotland to Northern Ireland on rescue boards... or that distance," Carl Russell said.

He said several of the group were stung by jellyfish during the arduous paddle.

"I got stung twice (on the arm). There are quite big Lion's mane jellyfish... A few of us got stung but we're fine," he said.

The rescue boards are typically used by lifeguards.

"They're basically like extended surf boards. We lie on them to paddle using our arms."

The team's route was mapped out to allow them to work with the tides. They also worked in formation so they could travel faster.

"We used tidal streams. As the tides move in and out you have different tidal streams that push you forwards or pull you backwards depending on what direction you're going," he said.

"We tried to use that to our advantage as much as we could. When we came across the North Channel we were side-on to one so we had to paddle in a westerly direction at a bit of an angle to the stream.

"For a while it was hard-going. There was a period of an hour when we weren't moving too fast.

"The main thing for us was getting to Cushendall... if we hadn't made it at a certain time and at a certain speed we would have been pushed past it towards Larne."

Mr Russell cautioned that everyone in the group had a strong background in water safety and trained for three months to make sure they were fit enough to complete the journey.

"We know the waters well," he said.

"We don't want anyone who doesn't have our experience to try this."

Mr Russell said although the group were tired from their efforts, they were delighted with their time.

To donate to the group's fundraising challenge visit www.gofundme.com/f/channel-38