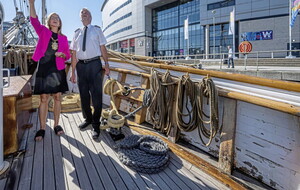 Belfast lord mayor Tina Black and captain Gerry Burns inspect the deck of the tall ship that will take up to 1,000 Irish youths to sea on voyages beginning next year.

A CROSS-border charity project to take up to 1,000 youths from across Ireland to sea in a spectacular tall ship each year will "change lives for the better" it has been claimed.

The Atlantic Youth Trust charity has purchased a 164ft schooner from Sweden, which is to be officially renamed Grace O'Malley, for the project which is to begin sailings next year.

The charity aims to take 40 young people from all backgrounds on 10-day sea voyages, where they will get to experience every facet of maintaining a working vessel - from hoisting sails to washing dishes.

The ship - featuring a banner stating 'Young people of Ireland, this is your ship' - was in Belfast this week before making its way to Dublin and Cork.

It is being renamed Grace O'Malley after the 16th century pirate queen from Connaught who managed to broker her son's release from prison after a meeting with Queen Elizabeth I.

Belfast lord mayor Tina Black presented the ship's captain Gerry Burns with a special plaque during its time at the city's docks ahead departing for Dublin.

Atlantic Youth Trust president Peter Cooke said the project is based on a similar youth initiative in New Zealand.

The charity is seeking financial support from both Dublin and Stormont, and was mentioned in the 2015 Fresh Start Agreement.

"The purchase of this ship is an important step forward, and now, during an extensive refit, we need to confirm the support of both governments on this island," Mr Cooke said.

"This project is already enshrined in the Programme for Government in the Republic, and listed in the Stormont Fresh Start Agreement. It now needs to be fully integrated into both jurisdictions' education programmes."

The Fresh Start Agreement states: "As part of the mid-term Review of the Capital Plan, the Irish government will work also with the Northern Ireland Executive to seek agreement on a funding plan for the Atlantic Youth Trust initiative."

Speaking of what young people would experience when the voyages begin, Mr Cooke said: "On the final day (of each voyage) they elect from their number which of them will carry out each essential role in the team, from the captain to the navigator to the dish washer.

"The professional crew will not intervene except for safety considerations. The young people will run the entire ship themselves for a day. They have in effect created an effective team and a working democracy, both immensely valuable in their future lives."

He added: "Given the support previously promised by both governments, we will change lives for the better."