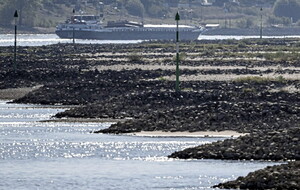 The persistent drought has made the level of the Rhine fall further and further. Picture by Federico Gambarini/dpa via AP

AN unprecedented drought is afflicting nearly half of the European continent and is damaging farm economies, forcing water restrictions and threatening aquatic species.

The dire consequences of soaring summer temperatures on the continent come as a drought was declared for parts of England following the driest summer for 50 years.

The conditions, which have almost completely deprived some areas of England of rainfall all summer, have prompted the National Drought Group to move southern parts of the country into official drought status.

Britain and Ireland are seeing record temperatures in the second heatwave of the summer. Oak Park in Carlow recorded a temperature of 30C yesterday while in the north temperatures have been peaking at mid to late 20 degrees C.

On the continent, there has been no significant rainfall for almost two months in Western, Central and Southern Europe, with the dry period is expected to continue in what experts say could be the worst drought in 500 years.

Climate change is exacerbating conditions as hotter temperatures speed up evaporation, thirsty plants take in more moisture and reduced snowfall in the winter limits supplies of fresh water available for irrigation in the summer.

Europe is not alone in the crisis, with drought conditions also reported in East Africa, the western United States and northern Mexico.

The European Commission's Joint Research Centre warned this week that drought conditions will get worse and potentially affect 47 per cent of the continent.

Andrea Toreti, a senior researcher at the European Drought Observatory, said a drought in 2018 was so extreme that there were no similar events for the last 500 years, "but this year, I think, it is really worse".

The drought has caused some European countries to impose restrictions on water usage, and shipping is endangered on the Rhine and the Danube.

The drought in England could lead to more measures such as hosepipe bans, however, the Environment Agency has reassured the public that essential water supplies are safe.

Water minister Steve Double said action was already being taken by the Government, the EA and others to manage the impacts.

Meanwhile, river flow data revealed almost 90 per cent of measuring sites were showing below normal readings, with 29 per cent classed as "exceptionally low".

It comes after the driest July on record for some areas and the driest first half of the year since 1976.