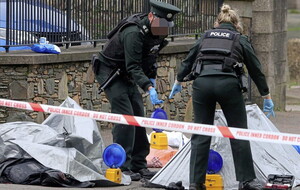 The scene in Downpatrick's Church Street in the wake of the stabbing. Picture by Mal McCann.

A CO Down man has been ordered to stand trial accused of murdering a 28-year-old on a street in broad daylight.

The Preliminary Enquiry at Downpatrick Magistrates Court was however conducted in the absence of 36-year-old Barry Donnelly as he is currently being held in a secure mental health unit at Knockbracken Healthcare Park.

Donnelly, from Church Street in Downpatrick, faces charges across two indictments but defence counsel Caitriona Keenan told the court they will likely “proceed together in the Crown Court.”

Donnelly is accused of the murder of Aidan Mann and possessing “two large kitchen knives” in public, close to his home on Church Street in Downpatrick, on January 3 this year.

The talented tattoo artist, also known as Zen Black, was attacked on Church Street around 11am and although given treatment by paramedics died at the scene.

On a separate set of charges, Donnelly is accused of inflicting actual bodily harm to a man and woman on June 28 last year and with possessing a golf club as a weapon with intent to cause ABH on the same date.

None of the facts of either case were opened in court.

Remanding Donnelly into continuing custody, District Judge Peter Magill returned the case to Downpatrick Crown Court. No date was set for the arraignment.