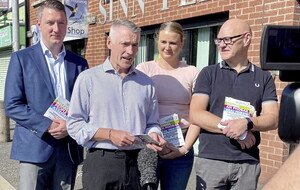 SUBMISSIONS have opened to Sinn Féin's new commission examining the future of Ireland.

An inaugural assembly, aimed at informing the commission's final report, will take place in the Waterfront Studio in Belfast's Waterfront Hall on the evening of October 12.

“Today I am delighted to announce that the other major pillar of the commission project, that is the collection of written submissions from all across the country and beyond, is also live," the South Antrim MLA said.

“The commission will operate under the broad theme of ‘the new Ireland is for everyone – have your say’ - all citizens are being invited to have their say on the future of Ireland.

“It is a genuine initiative from Sinn Féin to nurture the very vocal, public and academic conversation that is underway on constitutional change and Irish unity."

The former Stormont junior minister said the initiative was intended to "widen democratic participation and to serve as a model of grassroots consultation".

“It extends an open invitation to all citizens and sections of society and the Irish diaspora to submit their views, concerns and aspirations, via participation in the people’s assemblies or through the online submissions portal which has been developed," he said.

“The commission will seek to engage with the protestant and unionist sections of our people – our neighbours with a British identity, and the unionist, Protestant and loyalist members of our community are especially welcome to participate."

Submissions to the commission on the future of Ireland can be made from today at sinnfein.ie/futureofireland.