Féile an Phobail hail absence of anti-internment bonfires in Belfast 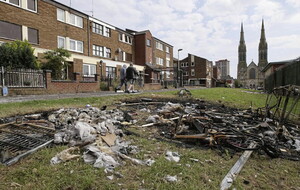 In previous years, some young people were involved in erecting bonfires in west Belfast to mark the introduction of internment without trial in August 1971. Picture by Hugh Russell

Feile An Phobail organisers have hailed the absence of large-scale internment bonfires in Belfast.

Traditionally, the pyres were lit each year to mark the anniversary of the introduction of internment without trial on August 9 1971.

However, efforts have been made over several years, including a large music concert as part of Feile An Phobail, to divert young people from bonfires.

Feile director Kevin Gamble said the large bonfires, which he called an "unwanted feature in this community", again did not happen this year, describing a "massive success".

There was a small unplanned bonfire in the Markets area of south Belfast on Monday evening, it was understood.

A police spokesman said officers did not receive any reports of bonfires on Monday.

Mr Gamble said more than 10,000 young people were in the Falls Park for the Feile Dance Night.

He said the dance night meant that the "big bonfires that have been an unwanted feature in this community again didn’t happen and that is a massive success.

"In past years, these unwanted bonfires have brought destruction and an increase in anti-social behaviour to the areas in which they were held.

“Due to the support of the local community, the hard work and commitment of Féile staff and volunteers, community and youth organisations, political representatives, and Belfast City Council, Belfast was bonfire free last night and all those involved in achieving this deserve praise.

"The benefit of the absence of these unwanted bonfires on 8th August is significant, as well as the positive images of young people enjoying themselves emanating from the Falls Park, there is also a considerable benefit to the local economy which the associated increase in visitor footfall and spending brings due to Féile".

Sinn Féin assembly member Deirdre Hargey praised the work of all those who worked to ensure young people became involved in diversionary activities.

"It’s a real credit to everyone involved in the running of a series of fantastic community festivals right across the city which promotes everything that is positive about Belfast," she said.

"It’s also a credit to the young people of Belfast who played their part in supporting their community and helping to keep it safe while having a great night out".