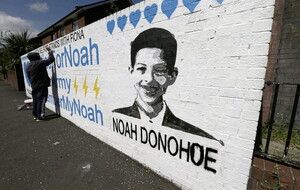 A mural dedicated to Noah Donohoe in North Belfast

Police files linked to the death of Noah Donohoe show no loyalist or state agent involvement, it has been reported.

Since then his family and supporters have campaigned to find out how the schoolboy died.

Some theories centre on claims that loyalists were responsible for Noah’s death.

A post-mortem examination found he had died from drowning.

A decision by Secretary of State Shailesh Vara to approve a Public Interest Immunity (PII) certificate last week sparked an online backlash and has added fuel to online speculation.

PII certificates are often used by the state in a bid to disguise the role of informers and agents.

A report in the Sunday Independent claimed that three files are the subject of PII certificates.

It is claimed the first file contains intelligence documents, the second is an overview of police action, lines of inquiry and intelligence.

The third contains PSNI notebooks, conference notes and maps of the search area.

It has been suggested that some of the redactions are designed to protect intelligence reference numbers and those providing information.

At a Policing Board meeting in March, Assistant Chief Constable Mark McEwan spoke about the use of PIIs.

“I want to put on record the fact that all of us involved in this investigation are fully and continually cognisant of the fact that at its heart this is a case involving the death of a child and a mother who has lost her son in incredibly tragic circumstances,” he said.

“No-one within the team or who has had any involvement with this investigation has any desire to try and prevent the family from getting answers about what happened.”

Mr McEwan also referred to redactions made to take into account Article Two rights raised in the European Convention on Human Rights, which protects the right to life.

The decision to withhold some files has sparked criticism from the Donohoe family, with a protest planned for Belfast City Hall on Saturday, August 13.

It is claimed some redactions have been made to protect police methodology and software programmes used to search electronic devices.