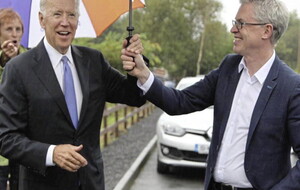 Joe Biden pictured with Joe Brolly. The president is understood to have sent the pundit and his new bride a good luck message following Saturday's wedding.

The former All-Ireland winning Derry footballer and barrister wed radio host Ms Blewitt - a cousin of US president Joe Biden - at the Ice House hotel in Ballina on Saturday.

The couple got engaged last year after dating for several years.

Just over 100 guests attended the ceremony, including Derry Girls actor and comedian Tommy Tiernan, and broadcaster Hector O hEochagain, who both co-host the The Tommy, Hector & Laurita Podcast with Ms Blewit. The comedy podcast has over 10 million global downloads

In a tweet following the ceremony, Mr O hEochagain and Mr Tiernan wrote: "Comhghairdeas to our Laurita & her beloved".

Following the ceremony, the couple attended a function at Ballina's Knockmore GAC.

It was reported that President Biden was to send the newlyweds a good luck message following the ceremony.

Mr Brolly met the president - who is a third cousin of his new spouse - during a visit to Washington DC for St Patrick's Day back in March.