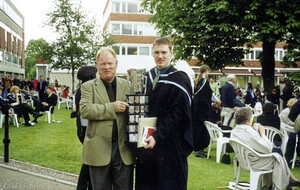 Prominent Co Tyrone businessman, community activist and historian Brendan McAnallen has been described as a man of “deep Christian faith”.

He was well known across Ireland for his work with The Cormac Trust, which he and his family set up following the death of his son, Tyrone GAA star Cormac McAnallen (24), in 2004.

Since then the trust has raised awareness of sudden cardiac deaths, promoting screening and providing defibrillators and training for sports clubs throughout Ireland.

As Requiem Mass began yesterday, symbols of Mr McAnallen’s life were brought to the altar.

During his homily Fr John Heagney spoke of his contribution to the local community.

“For all the good Brendan McAnallen did in this life may he be rewarded by the Lord for his many good deeds,” he said.

“He was richly blessed by God for his good insight and foresight and wisdom.

“He used these gifts that God gave him to do so much in the community here and far beyond and sought to make a difference through his life and he did that.”

“Brendan suffered many setbacks in life, tragedies, that many would have crippled under but because of his deep Christian faith Brendan did not allow these tragedies to make him angry or bitter.

“He used his energy to help other people and as reported throughout the media in these last days has helped so many people.”

The priest spoke of Mr McAnallen’s “pioneering work” in raising awareness of sudden adult death syndrome, adding that “many lives have been saved thanks to God and the great legacy that Brendan left behind”.

During Mass his son Dónal McAnallen, a noted historian, also spoke of his father’s love of preserving local history.

Mr McAnallen was later interred in a nearby cemetery.