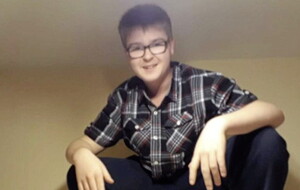 Dylan McGahan (18), from Killyclogher in Co Tyrone, died in a road traffic collision on the Barony Road, Mountfield on Sunday night

An 18-year-old man who died in a road crash in Co Tyrone had been waiting to hear if he had got a place in university amid his dream of becoming a commercial pilot.

Dylan McGahan's family said they have been left "numb" by his sudden death.

From Killyclogher, Dylan was the driver of a red Kia Picanto, which was involved in a collision with a black Mini on the Barony Road, Mountfield at around 11.15pm on Sunday.

Dylan's friend, who was a passenger in his car, and the driver of the other vehicle, were taken to hospital.

The friends had been returning from a day on the north coast where they spent time with Dylan's family and his girlfriend, when the crash happened.

Bryan McGahan said the death of his nephew, who had passed his driving test in October, had left the family "numb".

"We don't know what we do next. How do we move on? I just don't know, we are still numb. Hearing the news was the worst day of my life."

Mr McGahan revealed Dylan, who has a three-year-old brother called Rory, was also looking forward to the birth of a new sibling due in December.

He said his nephew had been keen to learn if the new baby was a boy or girl.

But as the scan was only carried out on Tuesday, he revealed his mother Janeen, who asked not to know the sex, had it written down and placed in a sealed envelope with Dylan.

Mr McGahan described his nephew as "funny and cheeky, as well as being kind and loving".

"He could light up any room with his swagger, big cheeky smile and infectious laugh," he said.

"When he was born, he brought our family together. He was closely raised by all five of us - his mum, nanny, auntie and two uncles. He was a son to all of us.

"He brought friends together, quiet kids, isolated kids, all from different backgrounds, all together in very strong, supportive, long-term friendships. That was his superpower.

"He did great in school. He had great family and friends, and then he had a great love, when he met Ruby and fell in love."

Mr McGahan said his nephew, who had just finished his studies at Drumragh Integrated College, had applied for a place at Ulster University in Coleraine to study history.

However, his dream job was becoming a commercial pilot.

"He spent many hours working towards his microlight plane licence and dreamed of flying commercially. He was smart, driven and determined," he said.

"He was always smiling. We will never forget him."