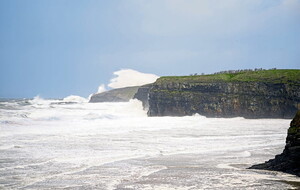 A man who died with his sister in a double drowning tragedy in Co Kerry has been described as an "absolute gentleman".

Father-of-two Dessie Byrne (50), from Lecarrow in Co Roscommon, is believed to have been on holiday when the tragedy unfolded at Men's Strand in Ballybunion on Thursday.

His sister, Muriel Eriksson (62) is understood to have been visiting home from Malmo, in Sweden, where she lived and worked.

It is understood Mr Byrne's teenage son was looking on as his father and aunt got into difficulties in the sea.

A major operation to rescue the siblings got underway after the alarm was raised around 5pm.

As lifeguards entered the water to try and save the pair Gardai, the Irish coastguard, the RNLI, a community lifeboat and a rescue helicopter were despatched to the scene.

The National Ambulance Service and air ambulance were also sent.

Both victims died at the scene and their remains were removed to University Hospital Kerry in Tralee, where post mortem examinations were expected to be carried out.

Roscommon based councillor Laurence Fallon said Mr Byrne moved into Lecarrow from Baylough, near Athlone, around 20 years ago.

An active member of the community he was a keen cyclist.

"What has happened is a terrible shock to everybody," he said.

“He was a great family man and the one word that everybody has been using about him is the word ‘gentleman'.

“He was an absolute gentleman. He was very involved in the local community," he told the Irish Examiner.

“Dessie was well liked and it is such a shock to hear that he has died," he added.

"Our thoughts and prayers are with Dessie's family at this time.”

Ballybunion based Sinn Féin councillor Robert Beasley said the community there has been left in shock.

"I met a lot of people on the clifftop and, when they realised what was happening men, women and children were leaving in their droves and they were in a terrible distressed state."

"Two deaths in the space of a couple of minutes on the water. It's terrible - a terrible tragedy. People are shocked beyond belief."

"Everyone has said how tragic is it and how they feel for the family," he said.