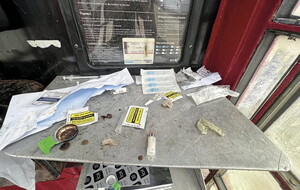 Evidence of drug use in a Belfast city centre phonebox. Picture by Hugh Russell

THERE have been calls for more resources to address homelessness, addiction and mental health issues in the aftermath of a special candle-lit vigil in Belfast on Sunday night.

Hundreds joined the late night gathering at Belfast City Hall to show solidarity with people dealing with addiction and homelessness.

Organised by the People's Kitchen, the event comes amid growing concern at the level of drug-dependency and narcotic-related fatalities in and around the city centre.

In recent weeks a number of homeless people have lost their lives in what are understood to be drug-related deaths.

SDLP councillor Paul McCusker, who is part of the People's Kitchen, said it was "extremely poignant" to see hundreds of people gather outside Belfast City Hall to highlight the need for greater support for everyone experiencing homelessness, addiction and mental health issues.

“The last few weeks have been very difficult ones for people in this city, with more lives lost on our streets as a result of these issues and we need an immediate intervention before this crisis deepens further," he said.

"The crowds gathered on Sunday shows the breadth of public support for this issue, but it’s deeply regrettable that is has gotten to this stage and we have had to take to the streets and demand action."

Mr McCusker said that while community and voluntary groups played a vital role, there was only so much they can do.

"We need to see proper help established to get these people off the streets and to help them deal with the issues that have led them there in the first place," he said.

"We need more beds for high risk and vulnerable people, overdose prevention facilities to support people in the grip of addiction and dual diagnosis services to help people get their lives back on track."

He called for a joined-up approach from the Stormont departments and ministers with responsibility for health, communities and justice.

Last month it was reported that 15 people had died in Belfast as a result of drugs overdoses since the start of June.

It is understood there have been a total of 34 such deaths in the greater Belfast area since the beginning of 2022.

The deaths have prompted calls for an overdose prevention facility in the city centre.

Used throughout Europe to combat drugs deaths, it is believed such a safe facility would reduce the risk of fatalities.