Monkeypox vaccination programme to be rolled out across Ireland 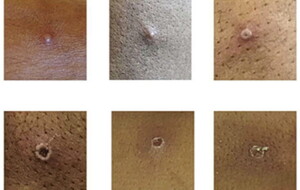 An image released by the UK Health Security Agency showing the stages of monkeypox lesions in those infected with the virus.

A MONKEYPOX vaccination programme is to be rolled out across Ireland.

Although anyone can catch the virus, data from the latest outbreak shows higher levels of transmission in men who have sex with other men.

The World Health Organisation (WHO) has declared the outbreak a global health emergency.

The smallpox vaccine Imvanex/Jynneos, which is shown to be effective against monkeypox, will be offered to people in Northern Ireland over the coming months who are considered to be at higher risk of exposure.

Two doses of the smallpox vaccine will be administered around 28 days apart. The programme in the Republic is expected to start as soon as possible.

"Monkeypox is usually a self-limiting illness, and most people recover within a few weeks, however the rapid spread of infection necessitates further measures beyond those currently in place," Mr Donnelly said.

"The evidence suggests this approach to targeted pre-exposure prophylaxis may be highly efficient in controlling further spread of the disease."

Dr Jillian Johnston, from the north's Public Health Agency, urged people to check for monkeypox symptoms, including rashes and blisters.

"If you have monkeypox symptoms, do not attend events or engage in any physical contact until you’ve called a GUM clinic and been assessed by a clinician," she said.

Dr Johnston said GUM clinics will contact those eligible for a vaccine.

"We encourage everyone, regardless of their sexuality, to be vigilant about new spots, ulcers and blisters," she said.

From May 13 to July 22, around 12,000 cases were reported. Around eight per cent of people needed hospital treatment.

No deaths have been reported.

"While we acknowledge uncertainties about how this outbreak will play out, we must respond to the epidemiology before us, focusing on the most dominant mode of transmission – skin-to-skin contact during sexual encounters – and the groups at highest risk of infection," he said.

"As such, the responsibility for stopping this outbreak is necessarily a joint responsibility, shared between health institutions and authorities, governments and affected communities and individuals themselves."