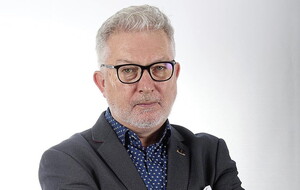 And yet, alongside this dissension there were ripples of hope. The prospect of a new beginning. The chance to leave the past behind. A rising sun seemed strong enough to dispel the shadows.

The two main traditions of unionism and nationalism appeared to have reached an historic compromise.

The manifestation of this new dawn came in the form of unlikely political rivals- David Trimble of the Ulster Unionists and Seamus Mallon of the SDLP. Two very different men in terms of temperament, outlook and language. One was punctilious, the other poetic. One painted by numbers whilst the other, in broad strokes.

But they had similarities too.

They had shared values and a moral compass when it came to attitudes towards the use of violence. They saw no place for guns in a democracy.

Respectively they were perceived to be the ‘hard men’ of their traditions and parties.

An odd coupling yes. But one which was businesslike. They understood the importance of imagery. The need for them to be seen to act in unison on big ticket items, even if they struggled at times with each other’s tetchiness. (Something they both denied existed).

Mallon said of Trimble: “We don’t always agree, and there will be times when we disagree, but we will disagree face to face… David’s back was sore enough at the present time that he wouldn’t appreciate it any other way.”

David Trimble was a political enigma.

He could be pedantic and more often took the scenic route to arrive at a juncture. His predecessor as UUP leader excelled at doing simply nothing. But Trimble had a sense of the need to do something. Due to his working class background, he had the instincts of a grass-root loyalist but the intellect to raise the bar.

He was not a visionary but he had a great sense of destiny and responsibility.

Trimble was courageous, determined and faultless in his defence of unionism and the Union. He was a scholar in a world of pugilists. But he adapted when required.

At times, he had the measure of the rabble rouser Paisley.

Though indecision, overthinking and disloyalty from key lieutenants served to undermine both his confidence and support base.

Trimble said it had been the greatest privilege of his life to lead one of the most democratic parties on these islands- the UUP. Unfortunately the cumbersome mechanics of the Ulster Unionist Party’s democratic structures meant it would be easier to herd cats at a crossroads than get an endorsement for his leadership.

Such is the revisionist narrative one would be forgiven for thinking the DUP delivered peace alone. They didn’t.

The DUP didn’t just try to capitalise on David Trimble’s heavy lifting during the peace process they also attempted to ruin his political reputation. The scenes in Banbridge after a Westminster election, where both David and Daphne Trimble were subjected to a torrent of personal abuse and intimidation by what could only be described as feral DUP supporters was scandalous. A lesser man would have called it quits. Not Trimble.

And let’s be clear, without Trimble and the Ulster Unionists who followed him there would have been no peace process. Had he not shown grit and guts, the Good Friday Agreement would have been stillborn.

As often pointed out by the late John Hume, to build reconciliation takes someone to reach out beyond their comfort zone and across the divide to make peace. Trimble was such a person. He took risks -political and personal and lived with the consequences.

As the poet Mel McMahon wrote in ‘Here and Now’ “And looking out, knowing, without saying, You can see so much from here”. David Trimble took the path for a better view.