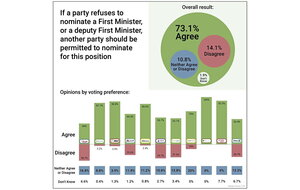 THE public overwhelmingly supports bypassing parties who veto the formation of an executive by failing to nominate a first or deputy first minister, new research suggests.

The latest survey from the Institute of Irish Studies-University of Liverpool/The Irish News found that more than two-thirds of respondents agreed that responsibility for nominating for the executive's top jobs should pass to a smaller rival if the largest party from a particular designation refuses.

The findings indicate widespread support for reforming Stormont's rules and creating the conditions that would prevent the current deadlock caused by the DUP's boycott.

Sir Jeffrey Donaldson's party has refused to nominate a deputy first minister over its concerns around the Northern Ireland Protocol.

Since May's poll saw the DUP superseded by Sinn Féin as Stormont's largest party, Sir Jeffrey has kept his boycott of the institutions in place and is also refusing to support the election of an assembly speaker.

If the situation does not change, a fresh assembly election is expected to be called early in the new year.

But the data from the latest opinion poll, carried out between June 28 and July 10, suggests strong support for circumventing such blockages and getting on with business.

Only 30.1 per cent of unionists oppose allowing a smaller party to nominate a first or deputy first minister, compared to 51.6 per cent in favour.

Only a tiny fraction (2.8 per cent) of nationalists are against removing the veto, while 89.8 per cent support such as move.

A strong majority of those who regard themselves as neither nationalist or unionist also support a rule change (74.9 per cent) compared to 11.2 per cent in favour of the status quo.

The survey also revealed strong support for a citizens' assembly, made up of a representative sample of the population, being given a role in improving how the assembly and executive function.

Support for a Stormont-focused citizens' assembly has the support of 79.6 per cent of nationalists; 73.4 per cent of neithers; and 65.8 per cent of unionists.

Reacting to the new survey, Slugger O’Toole’s deputy editor David McCann said: “This poll shows the majority of the public are getting fed up with our stop-start system of government.

“The paralysis fatigue mixed with the cost-of-living crisis is testing people’s patience and will give the DUP some pause for thought going into autumn.”