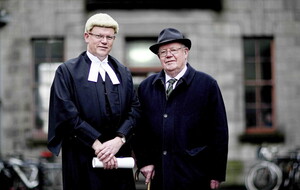 A FORMER journalist with The Irish News who went on to become editor of his hometown's local paper has been remembered as "hard working and tenacious".

Donal O'Donnell died last week at his home in the Glen in Newry. He was in his late eighties.

Mr O'Donnell was born and reared less than half-a-mile away in Bridge Street, alongside his late brother Turlough, a prominent lawyer and judge.

The deceased's nephew and namesake was appointed Chief Justice of Ireland in October last year.

In a journalism career spanning many decades, Mr O'Donnell worked for the Irish Press, The Irish News and News Letter.

In 1987 he was appointed editor of the Newry Reporter, a role he fulfilled until his retirement in 2000.

"He may have been diminutive in stature, but he had a big heart, and an 'on and off' switch on his hearing aid, which he used occasionally when dealing with over-enthusiastic candidates standing in local council elections," he said.

"Yes, he had a wicked sense of humour and accordingly it was a joy to be in his company."

Mr Hodgett described the former journalist as "first and foremost a loving father and family man" before extending sympathy to Mr O'Donnell's family on behalf of the management and staff at the Newry Reporter.

"For those privileged to have known and worked with Donal, his good-natured banter, dedication and hard work are only part of the rich memories he has left with us," he said.

Tom Kelly, Newry native and columnist with The Irish News, said the O'Donnells were a popular and well respected family in the city.

“Charlie O'Donnell was a noted social campaigner in the 1930s and 40s and his son Donal, continued his legacy by championing causes with a pen," he said.

"Donal was an old school reporter, hard working and tenacious. He had nose for a story. As editor of the Newry Reporter, Donal had tremendous wit which helped when as the local MP's political advisor, I was on the receiving end of his pithy put downs. In later years, he wasn't short on giving me feedback on my columns."

Donal O'Donnell is survived by his wife Margaret and children Grainne, Sine, Niav, Ronan and Fiona.

His funeral service took place yesterday at Church of the Assumption Drumalane, followed by a private cremation.