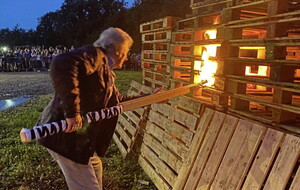 The Northern Ireland Environment Agency (NIEA) said it would "consider Mr Lawson's actions in line with our statutory role".

Mr Lawson's representatives were asked if he wished to comment, but had not replied last night.

However, he appeared to brush off the prospect of facing a probe, posting on Twitter "Bring it on".

NIEA has in the past said lighting a bonfire containing controlled waste is an "offence". It investigated former First Minister Paul Givan after he was similarly pictured lighting a pyre in 2016. The DUP Lagan Valley MLA, who was Communities Minister at the time, was given "advice" as part of a "proportional response".

Mr Lawson spoke about lighting the pyre during live coverage of the Twelfth for GB News.

"I was very well behaved. It was a very temperate evening. There was not a beer to be had - and I won the penalty competition."

After Mr Givan was pictured lighting a wood bonfire, the Department of Agriculture, Environment and Rural Affairs said NIEA "carefully considered the evidence available" and the "circumstances of the incident".

It added: "Consistent with our enforcement policy a proportional response was taken. This involved an advisory approach, providing advice to the individual involved, to make it clear that the lighting of bonfires, which contain controlled waste, is an offence."

It added: "NIEA is clear a person who lights a bonfire containing controlled waste, e.g. tyres, is technically committing an offence of treating the waste (by burning) in contravention of the legislation.

"We seek to use enforcement action that is proportionate to the significance of the offence. This includes for example the level of environmental harm and the level of financial benefit arising from the offence."

The report proposed that wood for bonfires should be made exempt from being regarded as controlled waste, allowing them to be lawful where landowners give permission.

It was published without Stormont agreeing an action plan on implementing any of the proposals.