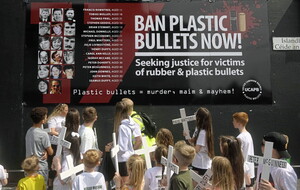 The new mural at Islandbawn Street featuring the names of the north's 17 victims of plastic bullets. Picture by Mark Marlow

A NEW mural featuring victims of plastic bullets has been unveiled in west Belfast as part of a campaign to ban their use in the north.

Members of the United Campaign Against Plastic Bullets (UCAPB) group marched along the Falls Road with supporters to Islandbawn Street yesterday where the mural featuring the names and photos of the north's 17 victims of the projectiles was officially unveiled.

The mural, which states 'Ban plastic bullets now' is the latest step by UCAPB to have the often-lethal items outlawed.

Not used by police in Britain, rubber and plastic bullets are still an option for the PSNI, which admitted firing six during serious disorder at a north Belfast interface last year.

Mark Kelly, whose 12-year-old sister Carol Ann was killed by a plastic bullet shot by a soldier in Twinbrook in 1981 and features on the mural, said yesterday's event was well-attended and an encouraging step in the campaign.

"The aim is to see the use of these weapons banned. We are also hoping for justice for the victims, but that appears increasingly unlikely due to the British government's Troubles amnesty legislation plans," he told the Irish News.

"But we will keep pushing to ensure plastic bullets will not be used on our streets. Today's march to the mural was absolutely a non-political event, and our campaign aim is that no community here has to suffer the grief caused by their use. It's great to see the support from so many young people also, and we hope that the message is heard so we don't have to have another generation campaigning for a ban that should have occurred a long time ago."

West Belfast Sinn Féin MLA Pat Sheehan described the event as "poignant", while west Belfast People Before Profit councillor Matt Collins said in a social media post: "It was a very moving event and a great turnout of support from the local community."