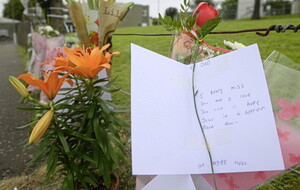 Floral tributes at the scene of the bonfire in Antiville, Larne

THE funeral of the Co Antrim man who died after falling from a bonfire is due to take place on Thursday.

John Steele had been helping to build a 50ft bonfire in Antiville in Larne when he fell on Saturday.

Mr Steele, a window cleaner aged in his 30s, was pronounced dead at the scene.

A funeral service for the father-of-two is due to take place at his home in Lindara Drive in Larne at 2pm  before moving to Larne Cemetery.

A death notice said "he will be sadly missed and fondly remembered by his loving family".

A fundraiser launched for the family of Mr Steele following his tragic death has raised around £8,000. The JustGiving page said "a dark cloud is over our wee town at the passing of John Steele".

The bonfire was dismantled on Sunday night as a mark of respect and a vigil was held for Mr Steele.

Yesterday, Mid and East Antrim Borough Council confirmed it was investigating as the pyre was built on its land.

"We are deeply shocked and saddened at the death of a young man in Larne on Saturday night and our thoughts and prayers are with his family and friends at this awful time," it said in a statement.

"Mid and East Antrim Borough Council works closely with relevant statutory partners and the community in relation to bonfires throughout the area.

"(The) council has developed a Cultural Celebrations Working Group with the aim of strengthening partnerships between local community leaders and statutory partners to encourage safe and responsible cultural celebrations.

"Whilst the construction and lighting of bonfires are not council-managed events, on an ongoing basis we work closely with the community and provide any support we can.

"As this tragedy occurred on council land, we have launched an investigation."

Mr Steele is survived by his parents Jackie and Artie and children Caitlyn and Macy-Lee.