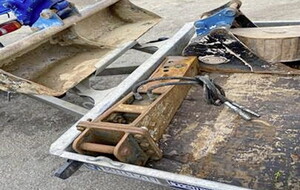 A silver Ivor Williams trailer has been stolen from a storage yard in Omagh. During the incident, thousands of pounds worth of plant machinery were taken

Police have appealed for information after thousands of pounds worth of plant machinery - including a mini digger -were stolen in Omagh.

The items were taken from a storage area on a lane way on the Edenbrack Road.

It is thought the theft took place sometime between 2pm on Saturday, June 18 and 6pm the following day.

Items taken include a Hitachi Zaxis 26U orange mini digger with VIN number, 32919.

Also taken was a silver Ivor Williams trailer which had its number plate removed at the scene.

A hydraulic breaker and four digger buckets were also stolen.