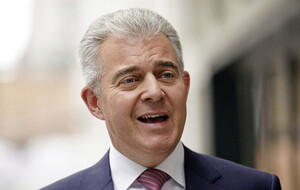 SECRETARY of State Brandon Lewis was among senior ministers last night to tell Boris Johnson his premiership was untenable.

It is understood Mr Lewis was due to be among Cabinet ministers who told Mr Johnson in person to resign last night.

However, it is thought his flight from Belfast was delayed, preventing him from being part of a delegation to Number 10.

Speaking at an integrated school in Belfast yesterday morning, Mr Lewis said he believed Mr Johnson had a duty to get on with delivering for people.

Mr Lewis insisted that the prime minister was determined to "fix the issues surrounding the Northern Ireland Protocol" in order to get "Stormont up and running".

Other MPs with links to the Northern Ireland Office (NIO) resigned their roles following a wider row over the Chris Pincher controversy.

Mr Logan wrote in his resignation letter: "The events over an extended period of time have not sat well with me.

"You did deserve a second chance because being prime minister is no easy task, indeed many will agree that you should feel personally proud of your achievements.

"But there is only so much anyone can expect my constituents to accept or ignore."

Mr Gullis said the government had become more focused on dealing with its "reputational damage" than "delivering for the people of this country".

Sinn Féin vice-president Michelle O'Neill said Mr Johnson had been "bad for the people of the north".

"He has failed victims of the conflict and their families," she said.

"He delivered the hardest Brexit possible against the wishes of the majority of our people, our political representatives and our businesses and he has torn up international agreements and shown contempt for international law.

"He has attacked the Good Friday Agreement, backing the boycott of our democratic institutions to placate Tory Brexiteers and the DUP in a desperate attempt to hold on to power."

"His determination to push through the hardest version of Brexit and use of the protocol for his own political ends has fostered division and political instability here, his disregard for international law has seriously damaged Britain's relations with the South, the EU and the US, and he has retraumatised victims of our Troubled past with an amnesty dressed up in false claims around reconciliation," he said.

"Boris Johnson should have been removed as prime minister long ago, that he has been allowed to continue this long and cause further damage is a matter of deep regret."

Stephen Farry, Alliance Party deputy leader, told the BBC: "I never thought that Boris Johnson was fit to be prime minister in the first place but events have proven me and countless others right and he has really dragged down standards of integrity in public office and the norms of democracy in the UK.

"I certainly believe he has to go."

DUP leader Sir Jeffrey Donaldson did not comment directly on the resignations.

"Our focus remains on working to see the removal of the Irish Sea border brought about through the NI Protocol," he said.

He added: "The legislation, making its legislative journey through parliament, is important in seeing the removal of the protocol and is necessary if we are to see solid foundations upon which to re-establish devolved government in NI."